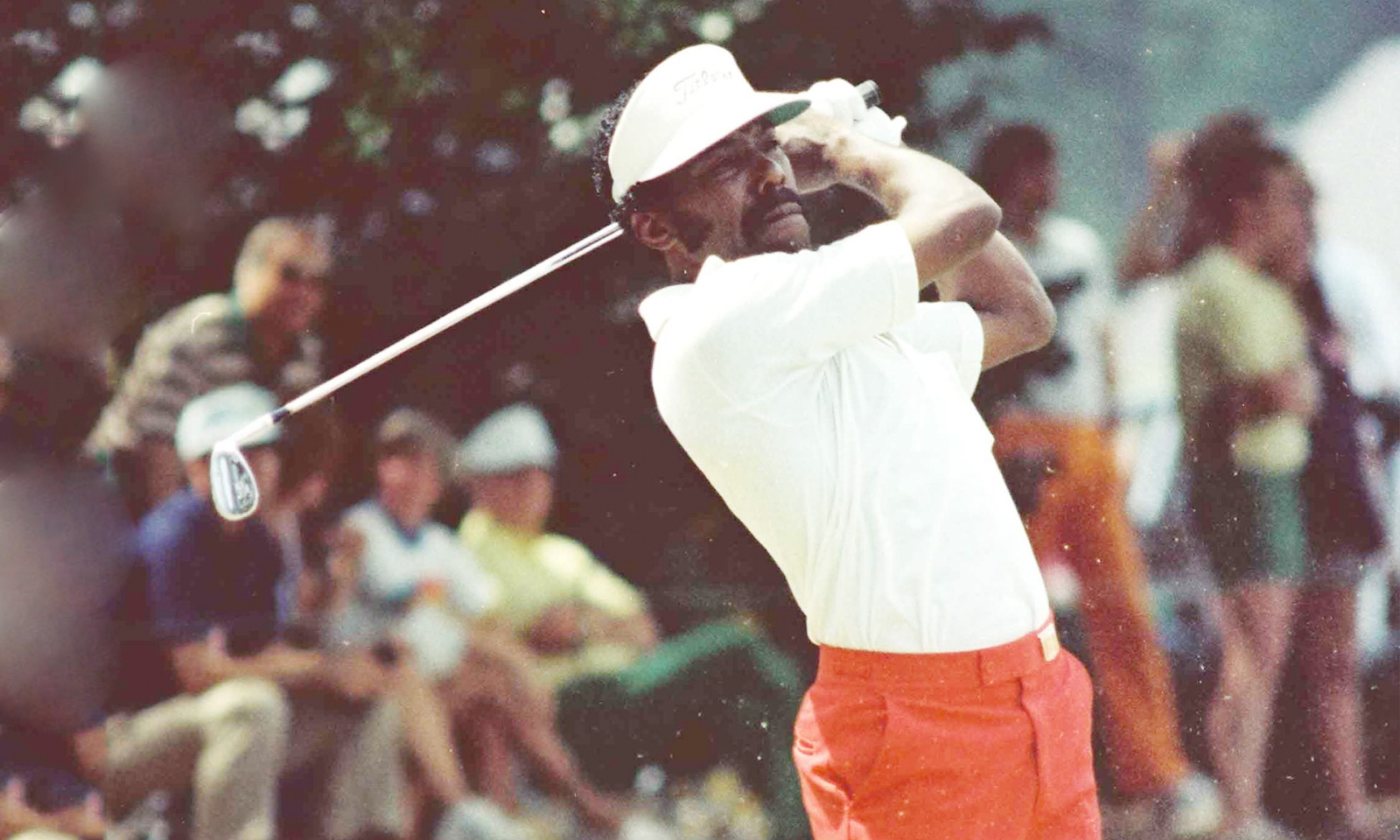 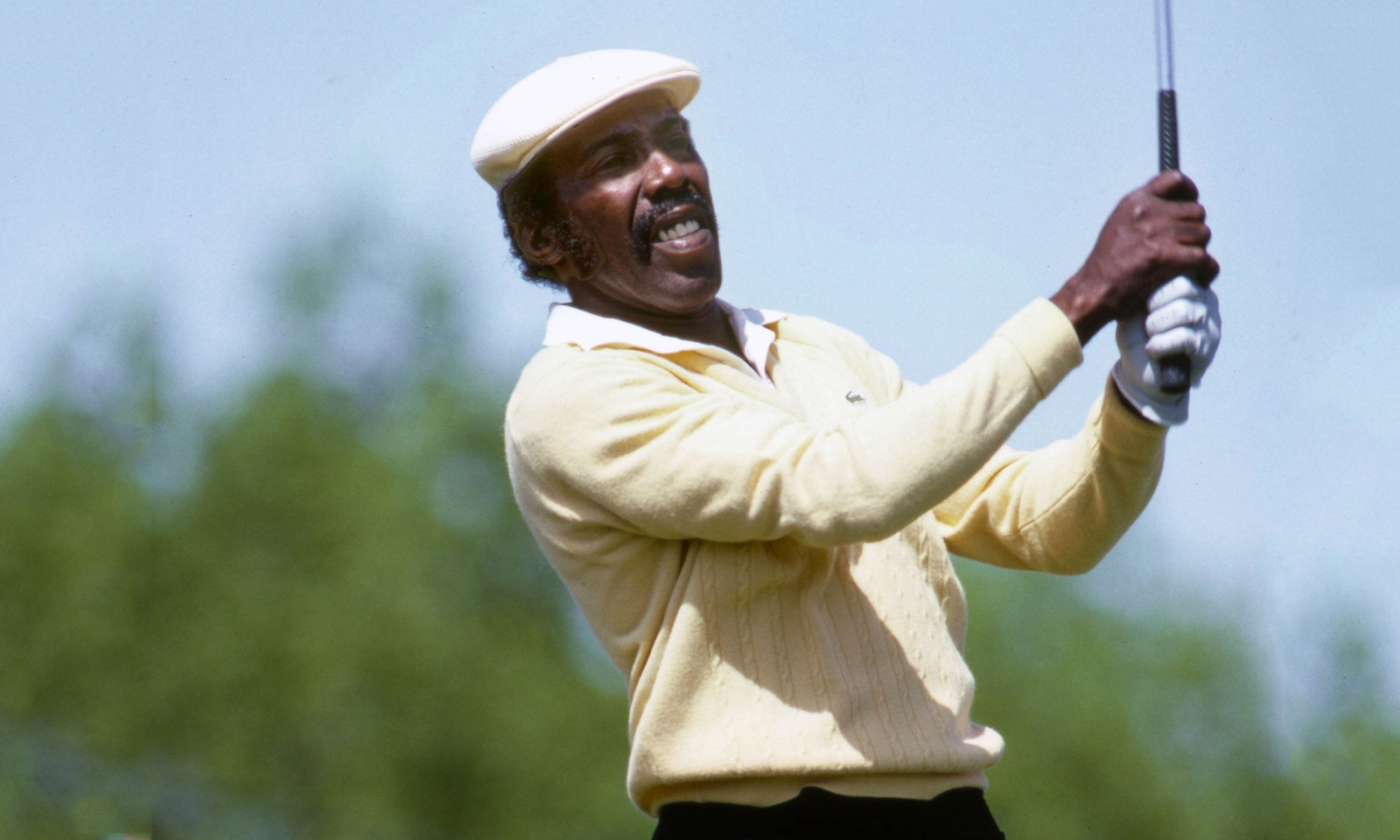 Calvin Peete is one of the most unlikely of success stories in any sport. Doubts? Read on.

The son of an auto factory worker, Calvin Peete was born in Detroit, one of 19 children borne by Dennis Peete’s two wives.

When his parents split up, the youngster spent much time at his grandmother’s place in Hayti, Missouri. Like any energetic kid, young Calvin was always looking for new adventures playing outdoors. However, one cloudy day, the 12-year-old fell from a cherry tree and broke his arm in three places.

Surgeons repaired the fractures, but Peete’s elbow healed incorrectly when his doctor didn’t properly set the arm in a cast, thus the elbow joint remained permanently fused, so he could never fully straighten his arm. Two years later, the young teen moved to be with his father in Pahoke, Florida, a city located on the shore of Lake Okeechobee and was once known as the “winter vegetable capital of the world.”

Peete dropped out of school and worked as a farm laborer cutting sugar cane as well as picking corn and beans. However, the work was literally back-breaking and physically draining and he was always looking for a way out.

Eventually, according to an article in the New York Times, his grandmother helped him finance a beat up 1956 Plymouth station wagon which he filled his car with clothes, cheap jewelry and other dry goods, then followed the migrant workers up and down the East Coast, from Florida to New York, selling whatever he could to scratch out a meager existence. 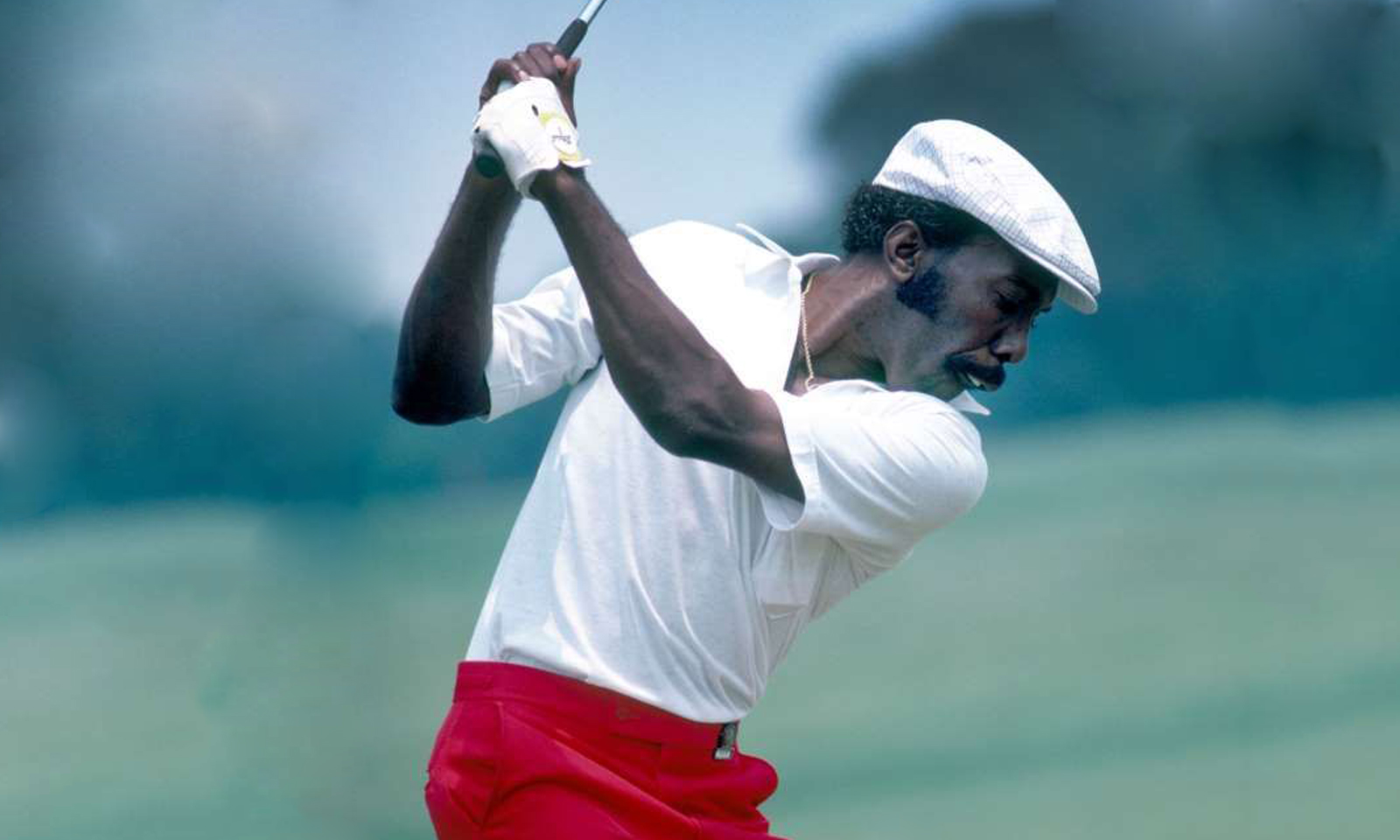 One summer afternoon in The Empire State outside Rochester, at the “old age” of 23, Peete was taken to a golf course for the first time by some friends.

Either play with us or wait for us, they told him. “I couldn’t get a ride home,” Peete said during one Boys Life interview, “so I went along with the fool idea.”

This introduction to the sport did not immediately create a spark because Peete had, ‘already spent enough time in the hot sun.’

But growing up poor and then learning how much money golfers were making, impacted his attitude.

According to author Pete McDaniel, who wrote, among other books, “Uneven Lies: The Heroic Story of African-Americans in Golf. “He said when he first put his hands on a golf club, it felt like that’s where they belonged,” McDaniel said. “He had found his calling, and then he knew that it was going to be his life from that moment on, and so he attacked the game.”

Now fueled by a single-minded determination, reading books like Ben Hogan’s “Five Lessons” and other instructional tomes by Sam Snead, Jack Nicklaus and Bob Toski and teaching himself how to develop a repeating swing at the driving range until his hands bled, it was reported that within six months Peete was breaking 80, and a year later he was breaking par. 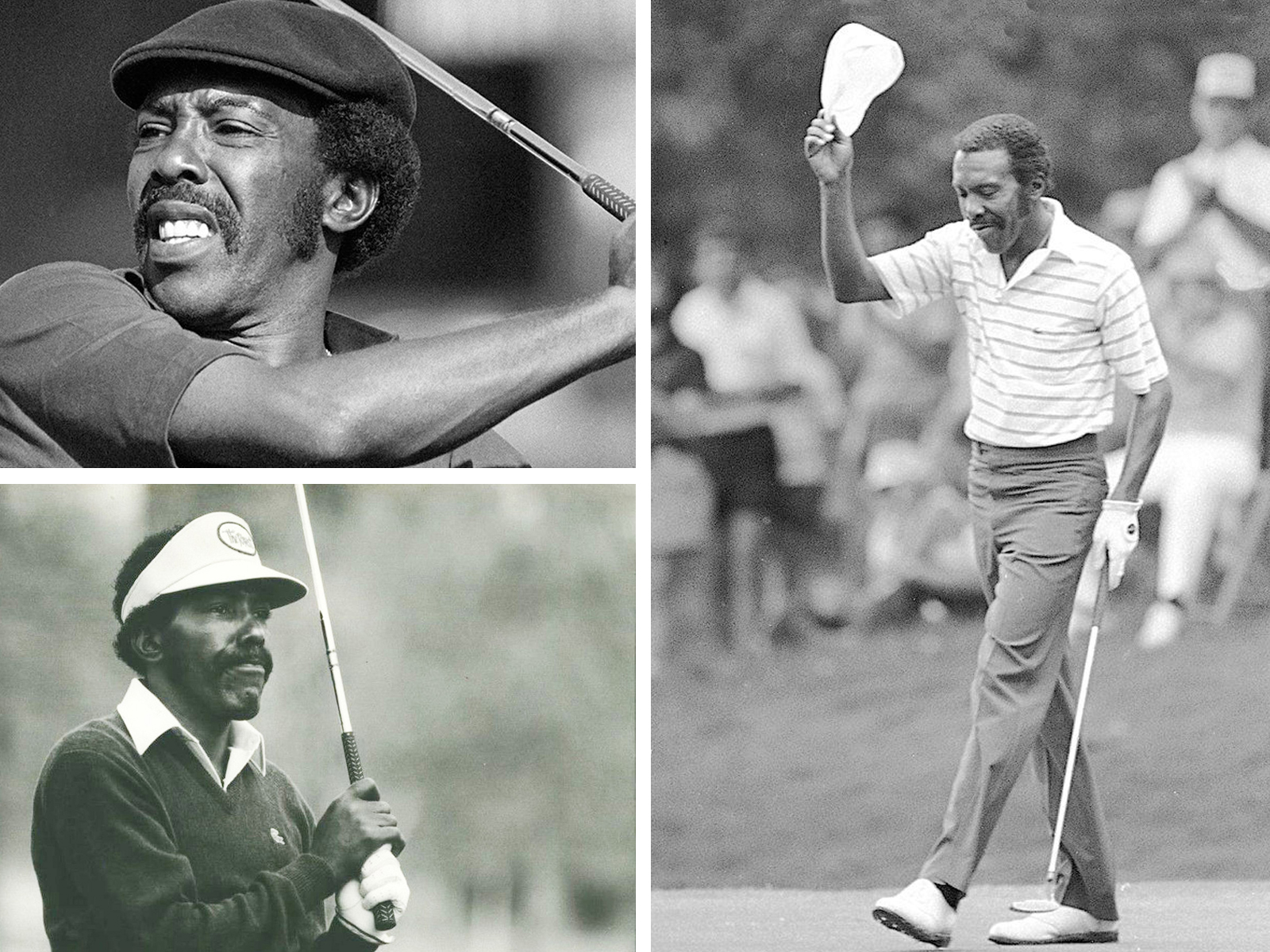 And when he did not have enough money to afford even a bucket of balls at the range, Peete would go out to a small public park in Fort Lauderdale and just hit golf balls, collect them, hit them again, collect them. Sometimes he’d swing in the dark and go by feel inventing a grip and a swing that felt right to him then use a flashlight to pick them up… and start again. According to one story, he hit golf balls so late into the night that, on occasion, people called the cops.

According to Dr. Tony Parker, retired historian of the World Golf Hall of Fame, Peete’s “calling” was crystalized in 1968 when he saw on television fellow African American Lee Elder competing against Jack Nicklaus and Frank Beard in a tournament playoff.

Inspired by Elder, Peete was even more determined to make a name for himself in the sport.

Turning pro in 1971 he competed on mini-tours like the United Golf Association and National Tournament Golfers Association.

It took three tries at the PGA TOUR qualifying school before finally earning his playing privileges in 1975. 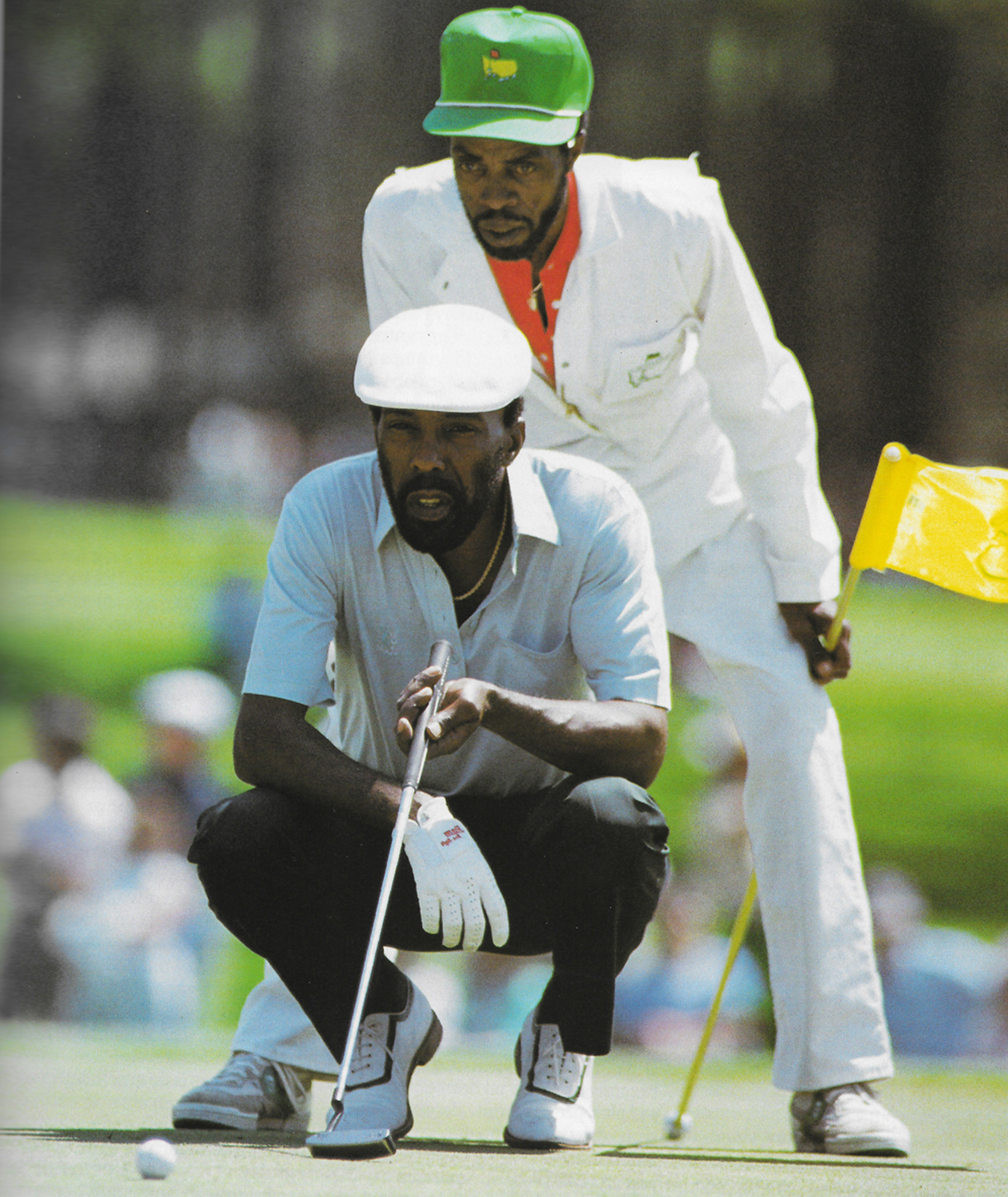 Though he lacked a consistent putting stroke and length off the tee, Peete never lacked confidence in himself, and what about his inability to straighten out his left arm from the childhood accident? After all, it is a golfing dictum that for right-handed golfers, the left arm must remain straight during a swing.

Perhaps a bit of serendipity at play here?

Honing a repeating swing within his limitations, there are some golf swing analysts who believe that his condition contributed to Peete’s driving accuracy. What they were saying is that his particular circumstances allowed him to create a golf swing path that brought him to return the club squarely from the back swing, back to the same position at impacting the ball.

While travel was expensive and there were no guarantees and the purses were a fraction of what the prize money is now, for the man who never had a golf lesson before he turned pro, who developed his own method, compensating for his handicap and developing a stroke uncanny in its accuracy, Peete made slow but steady progress.

One thing that was consistent was that Peete always felt he belonged out there competing against the very best.

A year after getting his TOUR card, Peete qualified for the U.S. Open where he played with Nicklaus in the final round. A few weeks later, his final-round playing partner was Arnold Palmer. Peete never trembled in his shoes grouped with some of the sport’s living legends.

His first PGA Tour victory came four years into his career, winning the Greater Milwaukee Open. The 32-year-old Peete, who had never taken a golfing lesson and without a major sponsor, had won against the best and became the fourth African-American to win on TOUR, joining Pete Brown, Charlie Sifford and Lee Elder. 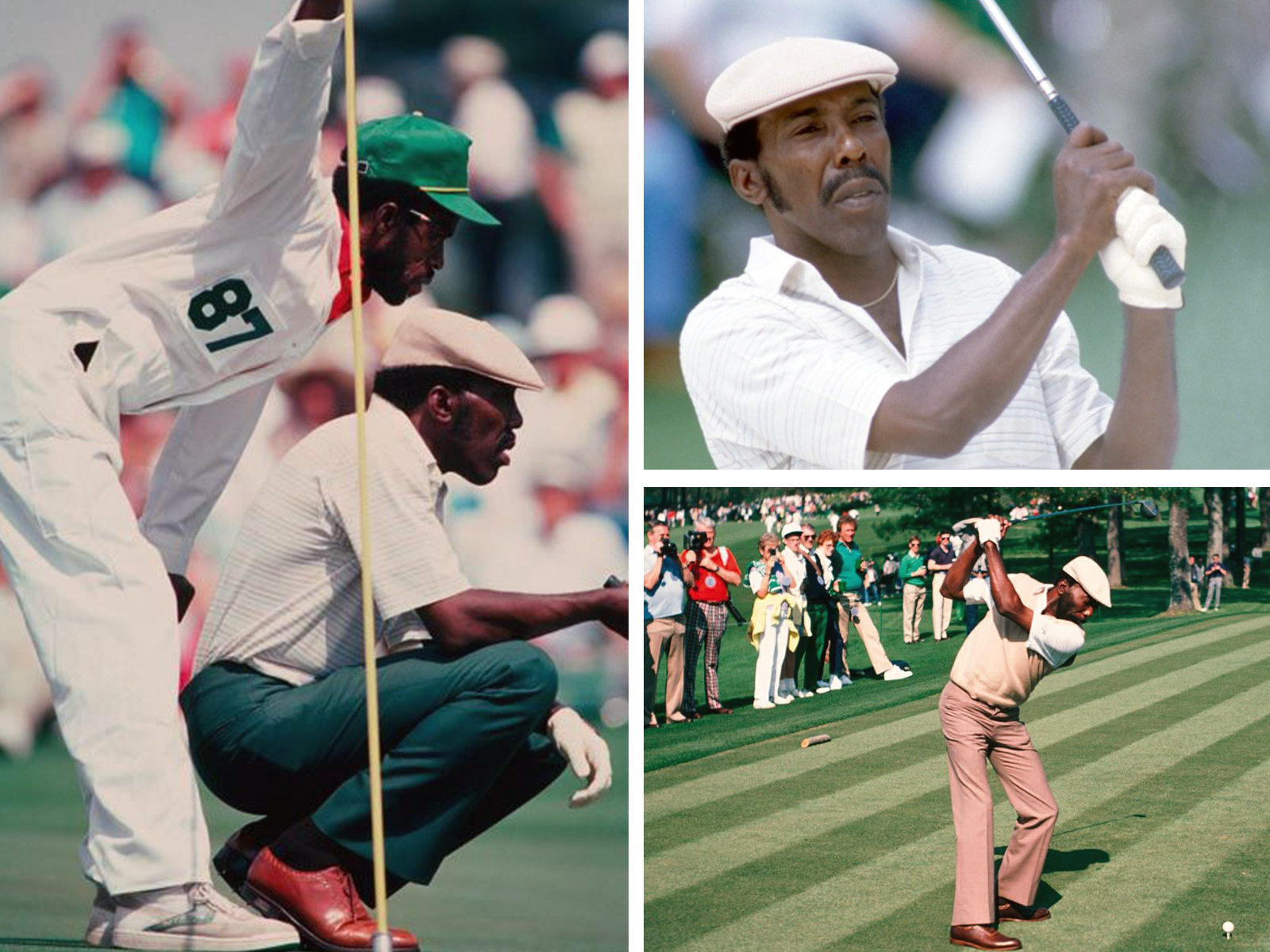 His “secret” was out, he simply hit it straighter, more often, than any of his competitors. Finding a Peete tee shot in the rough was simply not a happening and trees were just something he admired walking down the middle of the fairway for his next shot.

In the long history of golf, it is likely that no man ever hit a golf ball straighter. And there are numbers to back up that statement, (Peete was the leader in driving accuracy on the PGA Tour for 10 straight years, 1981–90). He was nicknamed “Mr. Accuracy” by other golfers. Pretty impressive back in the day when the balata ball regularly curved for most pros yet Peete’s ball didn’t.

“He was a driving machine,” said his friend and fellow touring pro, Jim Dent.

“I get my accuracy from my tempo and rhythm,” Peete told The New York Times in 1982. “I never really worked for it. It is just something that happened. I just seem to have a good tempo and good control as far as knowing just when to release the club.”

There are some comparisons of Peete to Ben Hogan in that both were quite reserved in manner, intensely devoted to practice and self-reliance and both liked to wear stylish caps. 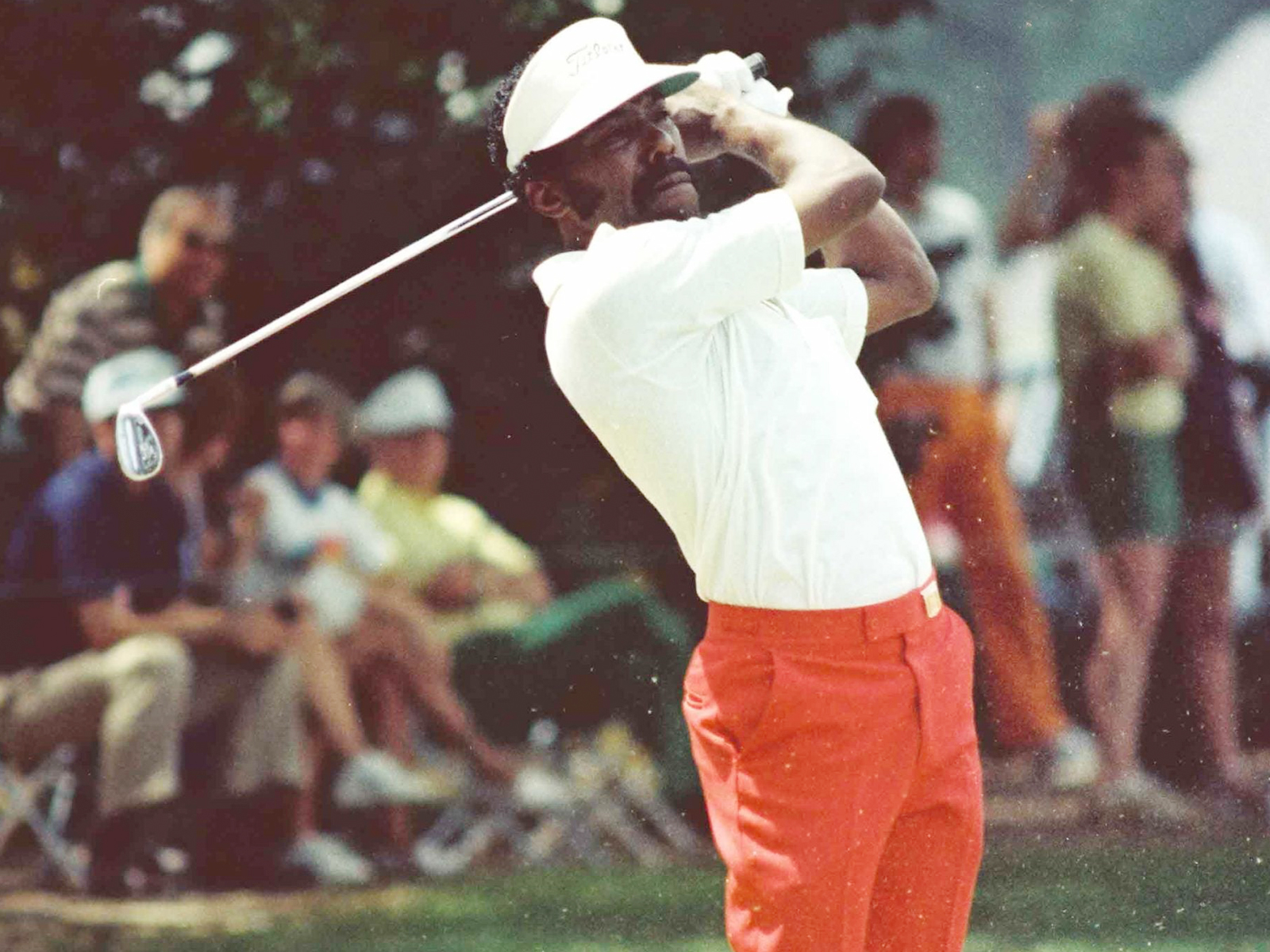 In 1984, he averaged 70.56 shots per round, winning the Vardon Trophy, given annually to the professional golfer with the lowest per-round score (and edging out Nicklaus.)

Though he did not win a major (he finished third in scorching heat at the 1982 PGA Championship at Southern Hills Country Club in Tulsa, Oklahoma and fourth at the 1983 U.S. Open at Oakmont and became the second African-American to play the Masters when he made his first of eight appearances in 1980. Peete’s strength — accuracy over distance —however, was not a good fit for the high ball/long ball-hitters’ paradise that is Augusta National. His best finish there was a tie for 11th in 1986), Peete did enjoy the spotlight in two of the sport’s most prominent events.

To be eligible for a U.S. Ryder Cup Team position one had to a fully accredited member of the PGA and one prerequisite for that is having completed high school, which Peete had never done. So, in 1982, having studied with his wife who was a part-time teacher, Peete earned his GED and therefore the ability to compete on the Ryder Cup team against the best players from Europe. Peete was a member of the victorious U.S. Team in 1983 with Nicklaus as captain. (He again played for the U.S. in the 1985 Ryder Cup. Overall, he finished with a 4-2-1 showing in the biennial team event).

In 1985, Peete won the prestigious Tournament Players Championship (now the Players Championship) in Ponte Vedra Beach, Fla., a victory that Sports Illustrated once described as “against the best field that will tee off all the year on one of the most unrelenting, terrorizing courses the pros play.” 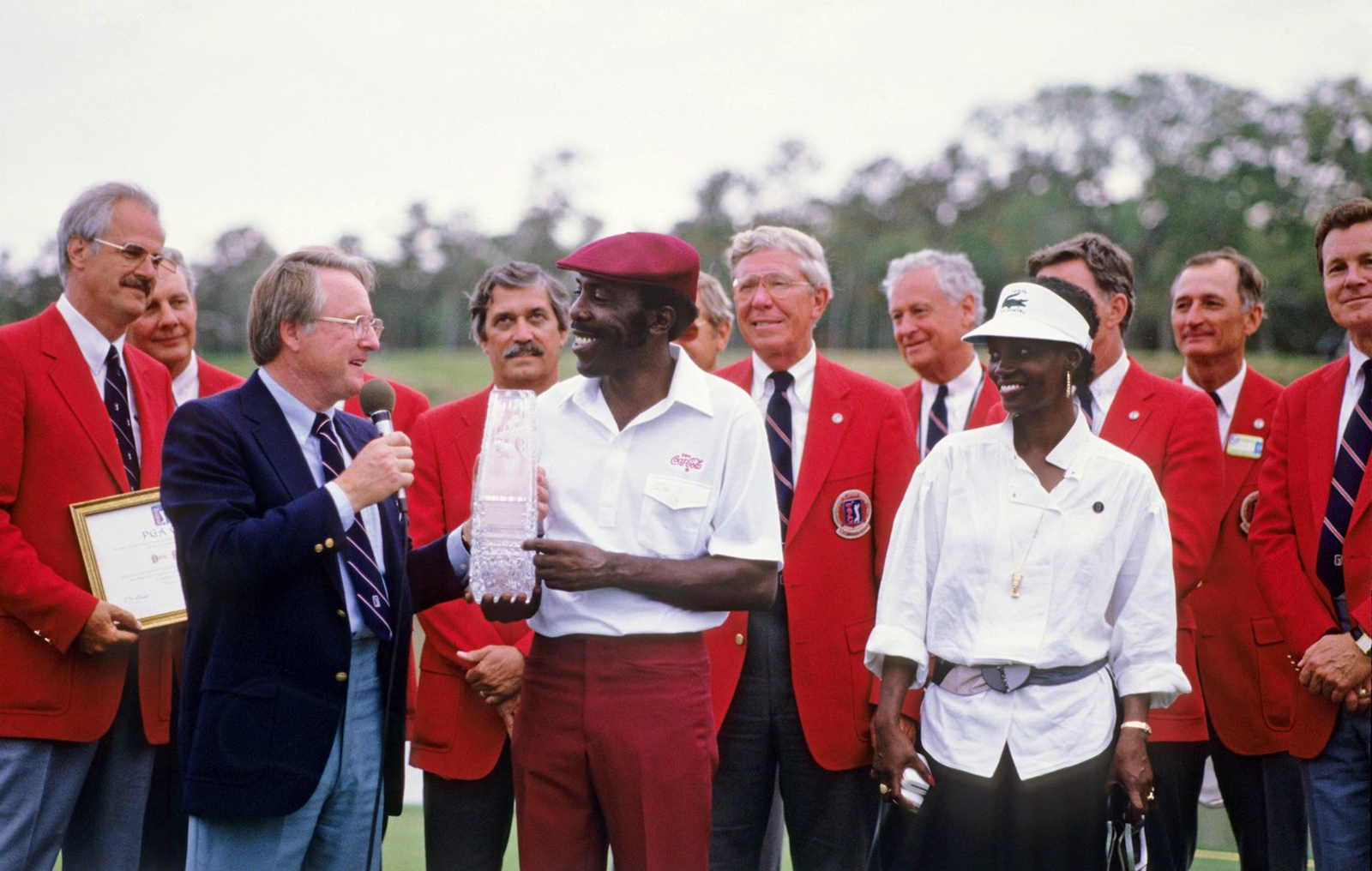 Interestingly, despite his legendary accuracy off the tee and into the green, Peete had only been able to break par just twice in 22 rounds of the competition whether contended at either the Stadium Course or the Sawgrass Country Club.

Nevertheless, on March 30th, 1985, he found himself tied for the 54-hole lead with Hale Irwin and D.A. Weibring and in the final group of the day after three consecutive under-par rounds.

Aided by the great reads on putts by his longtime caddie Dolphus “Golfball” Hall, Peete shot 66 which included eight birdies in the final round to win The Players, a record at the time for the lowest final round by a winner since the event moved to Ponte Vedra Beach. He was 41 years old and the first African-American winner of The Players.

It was the defining career moment for a man who came to golf from the humblest of backgrounds. And it was the first time Peete’s father had walked 18 holes and watched his son win a tournament. 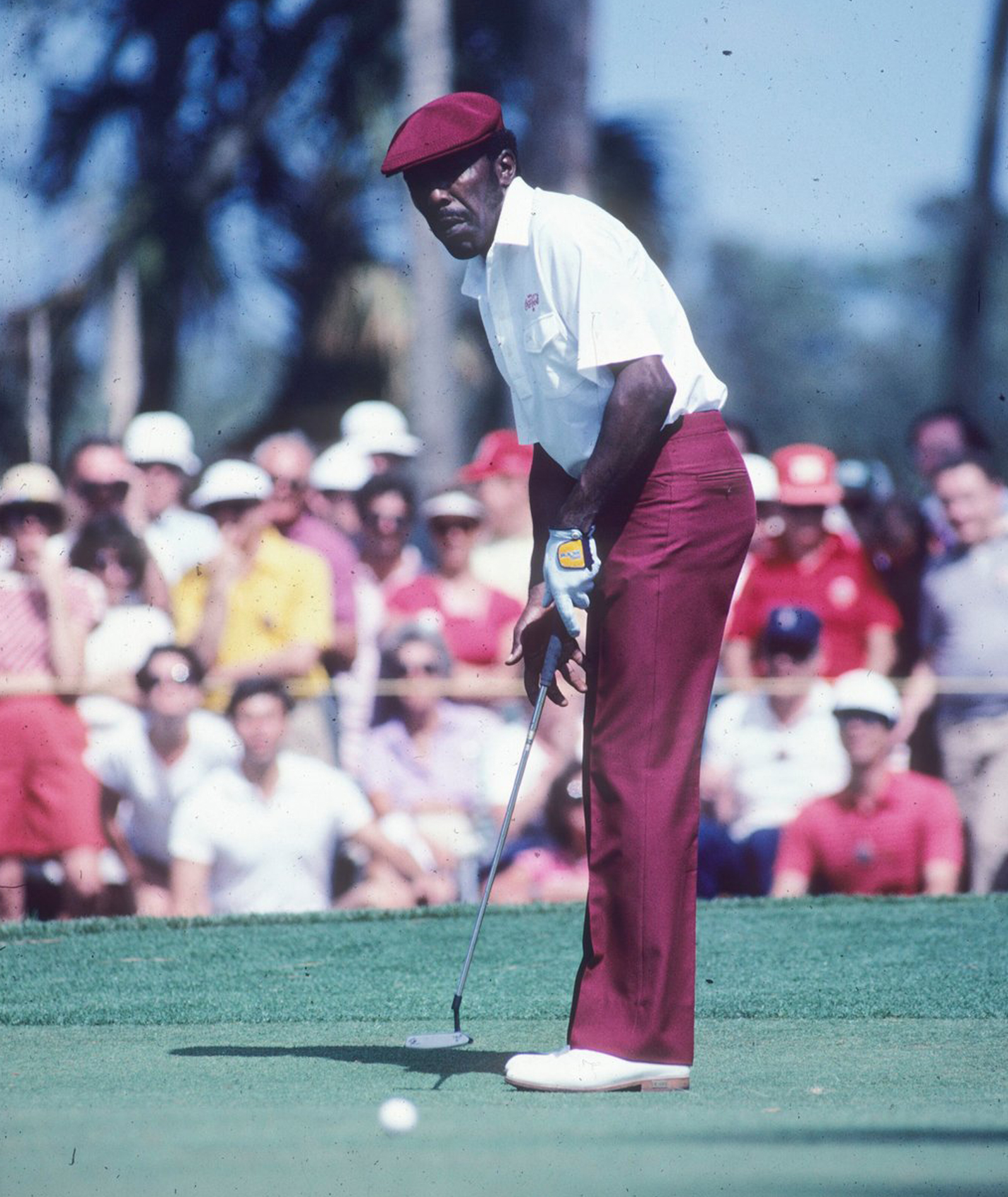 It was also Peete’s ninth PGA TOUR win since 1982, and no one had won more in that time frame.

And until Tiger won the 1997 Masters, it was the biggest victory ever for an African-American golfer.

There was not one logical reason for Calvin Peete to believe that he could succeed at golf.

Nobody taught Calvin Peete golf; he worked and grinded and with a strong self-belief (and uncanny accuracy on the course) produced a truly amazing career (this despite also suffering from Tourette’s syndrome -a problem with the nervous system that causes people to make sudden movements or sounds, called tics, that they can’t control – late in his career.)

“Calvin Peete was a remarkable golfer,” Jack Nicklaus wrote on his website. “He overcame a lot of adversity, including a physical limitation, to become a very, very good golfer.” 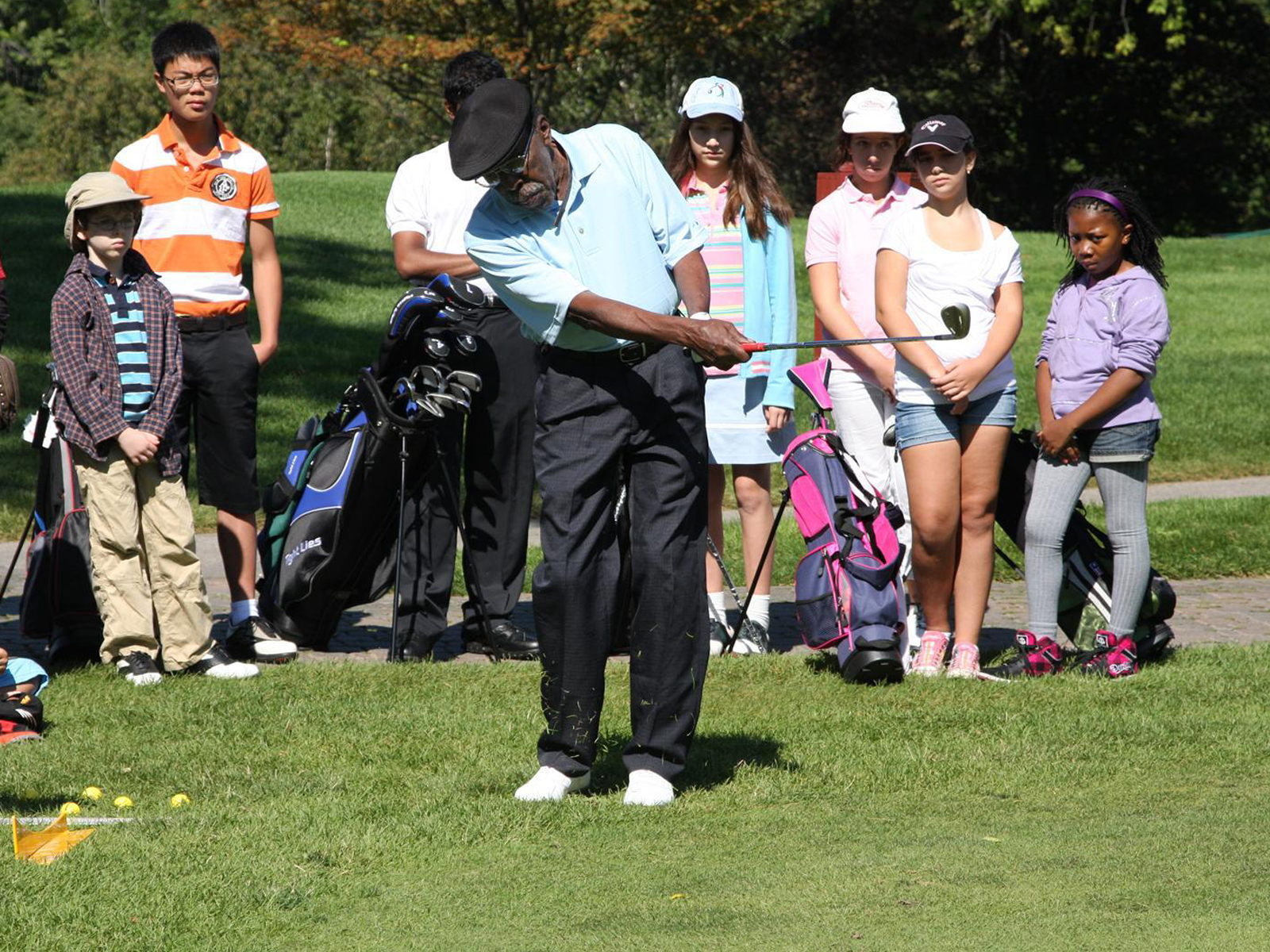 Between 1979 and 1986, he had 12 PGA Tour victories, making him one of the most recognizable and inspirational players on the tour. With such a winning record and despite earning $2.3 million on the PGA Tour and another $950,000 on the over-50 Champions Tour, Peete could never secure a major sponsor.

But that didn’t stop him from sponsoring others.

Said PGA TOUR Commissioner Tim Finchem at the time Peete passed away in 2015 from cancer, “Throughout his life, he gave so much, and we especially noticed it when he moved to Ponte Vedra Beach as he continued to support the community, the PGA TOUR and our various charitable pursuits. Along with his wife, Pepper, he made such a difference working with The First Tee and junior golf in this area. Calvin will always be remembered as a great champion and an individual who consistently gave back to the game. We will dearly miss him.”

Calvin Peete remains of sport’s most unlikely successes — a school dropout with a crooked left arm who did not pick up a golf club until his 20s, but immediately excelled at a game most pros learn as young children and did not join the pro tour until his 30s, yet still became one of the leading players of his era and the most successful black professional golfer before Tiger Woods.