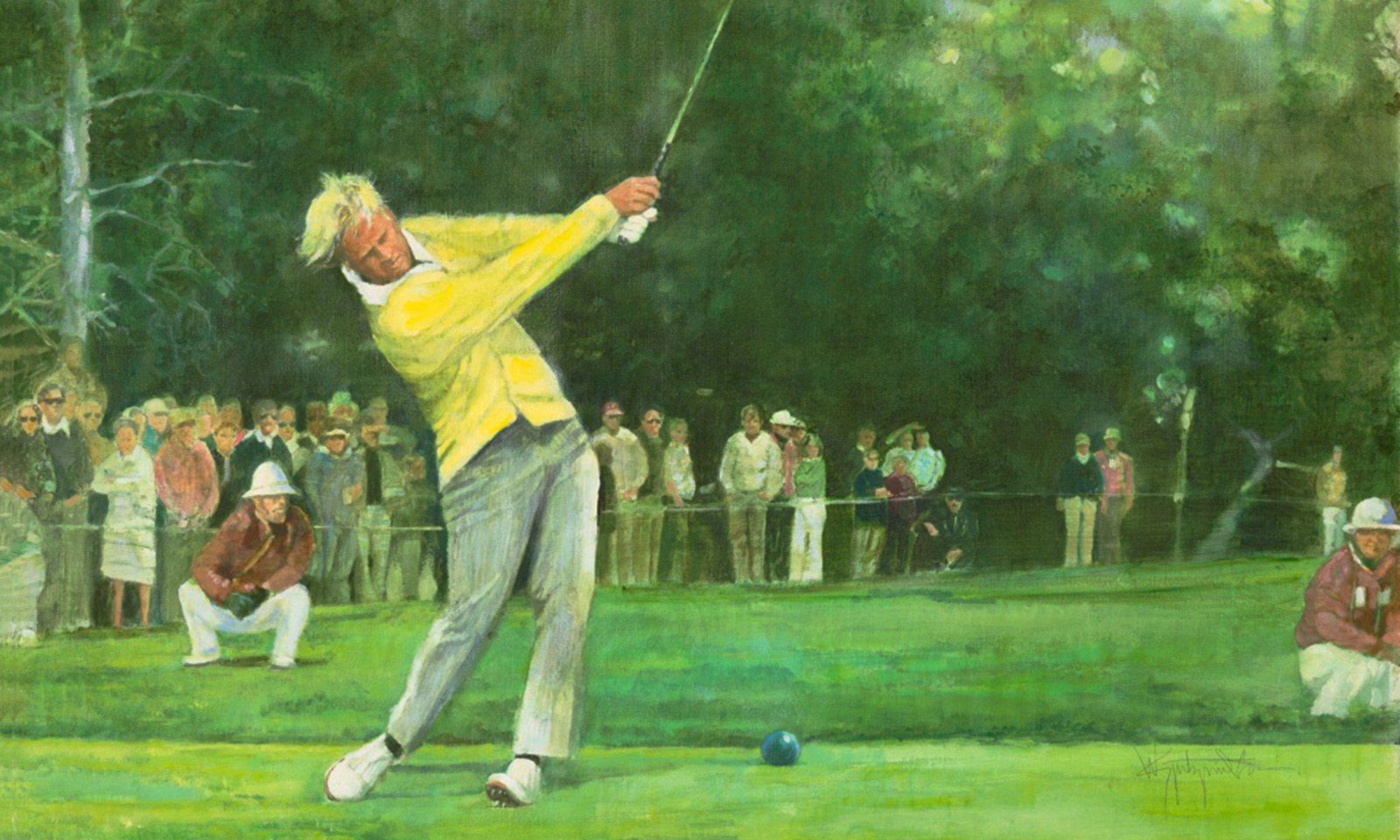 Jack Nicklaus holds the record for most Masters wins. Nicklaus won two majors in the same year five different times. The closest he came to winning three majors in one year was 1972, when Nicklaus won the Masters and U.S. Open, then finished second in the British Open.

Walt Spitzmiller, one of the world’s foremost sporting artists who specializes in golf, vividly captures Nicklaus’ memorable five PGA Championships as part of an extraordinary collection of 18 paintings simply entitled “Jack’s Majors.” This unprecedented artistic tribute memorializes a special moment from what Spitzmiller believes is golf’s greatest achievement of the modern era. The artist spent eight years painting Jack Nicklaus’ 18 major championship titles, and each work brings to life a scene from the “Golden Bear’s” legacy. 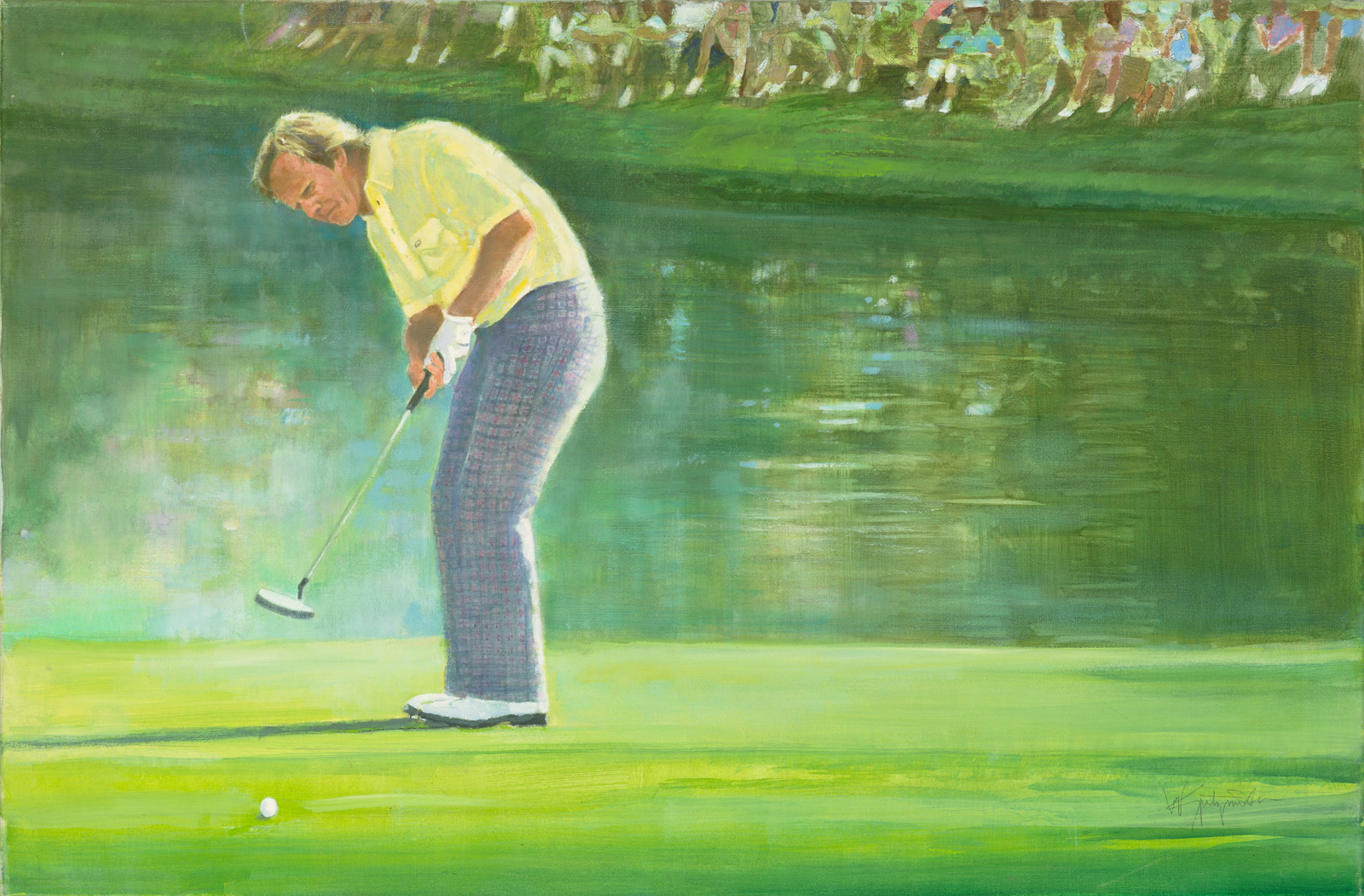 1986 Masters – Do You Believe in Magic (Augusta National Golf Club)

Nicklaus said: “I have always respected Walt’s work and how he interprets a scene and a moment in history. Walt dedicated himself to the challenge of putting on canvas the story of my 18 majors. It took me 25 years to win them, and it took Walt eight years to paint them. I hope he can reflect on his body of work with pride, because he should.” 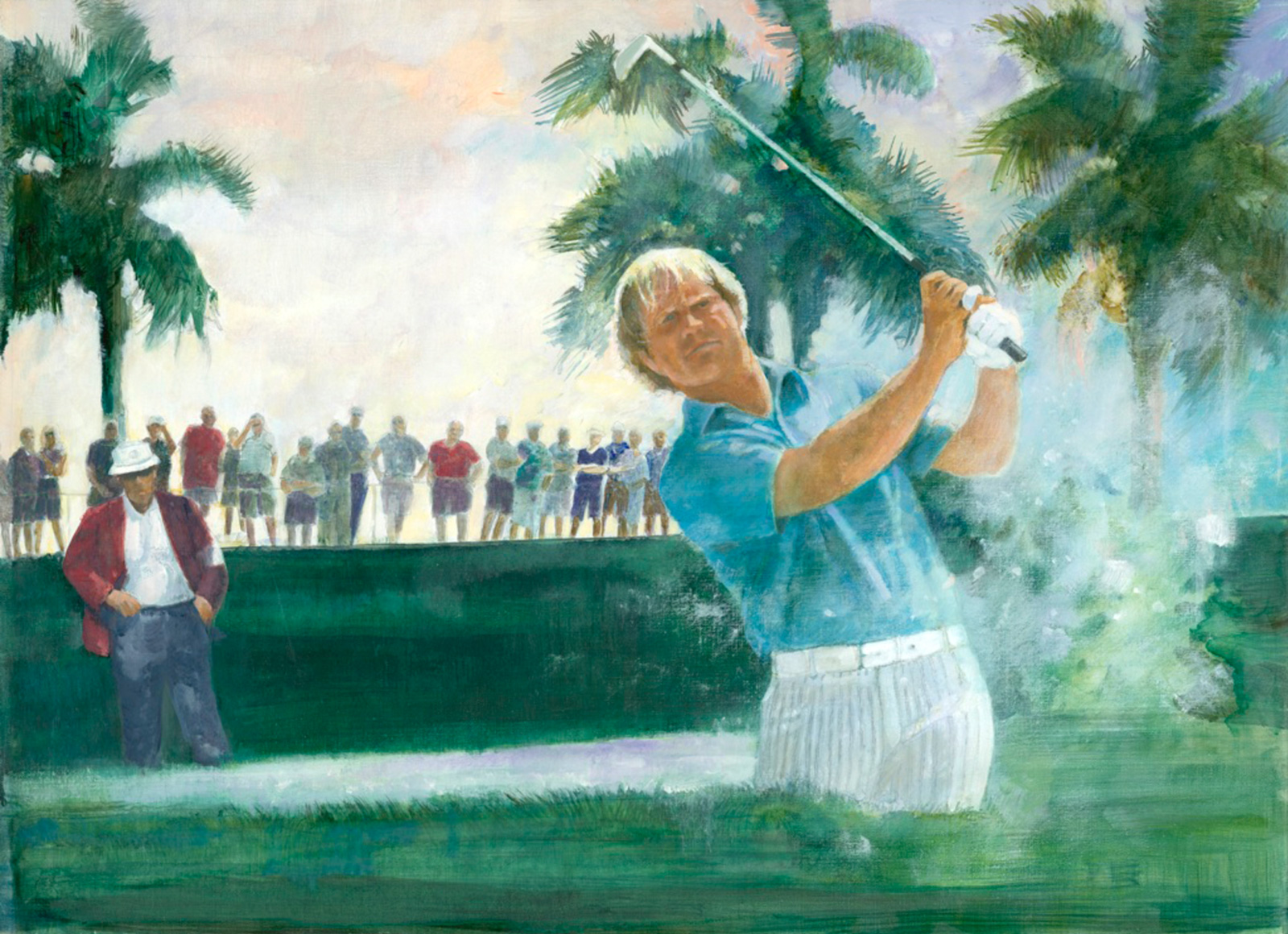 Walt’s golf art has been showcased by the USGA, marking only the third time in the association’s history that an individual artist was featured at Golf House. The PGA TOUR has commissioned him to create original paintings of recipients of their Lifetime Achievement Award, including Jack Nicklaus, Arnold Palmer, Gary Player and President George H.W. Bush. The TOUR also had Walt paint the members and two captains of the 2009 Presidents Cup teams. 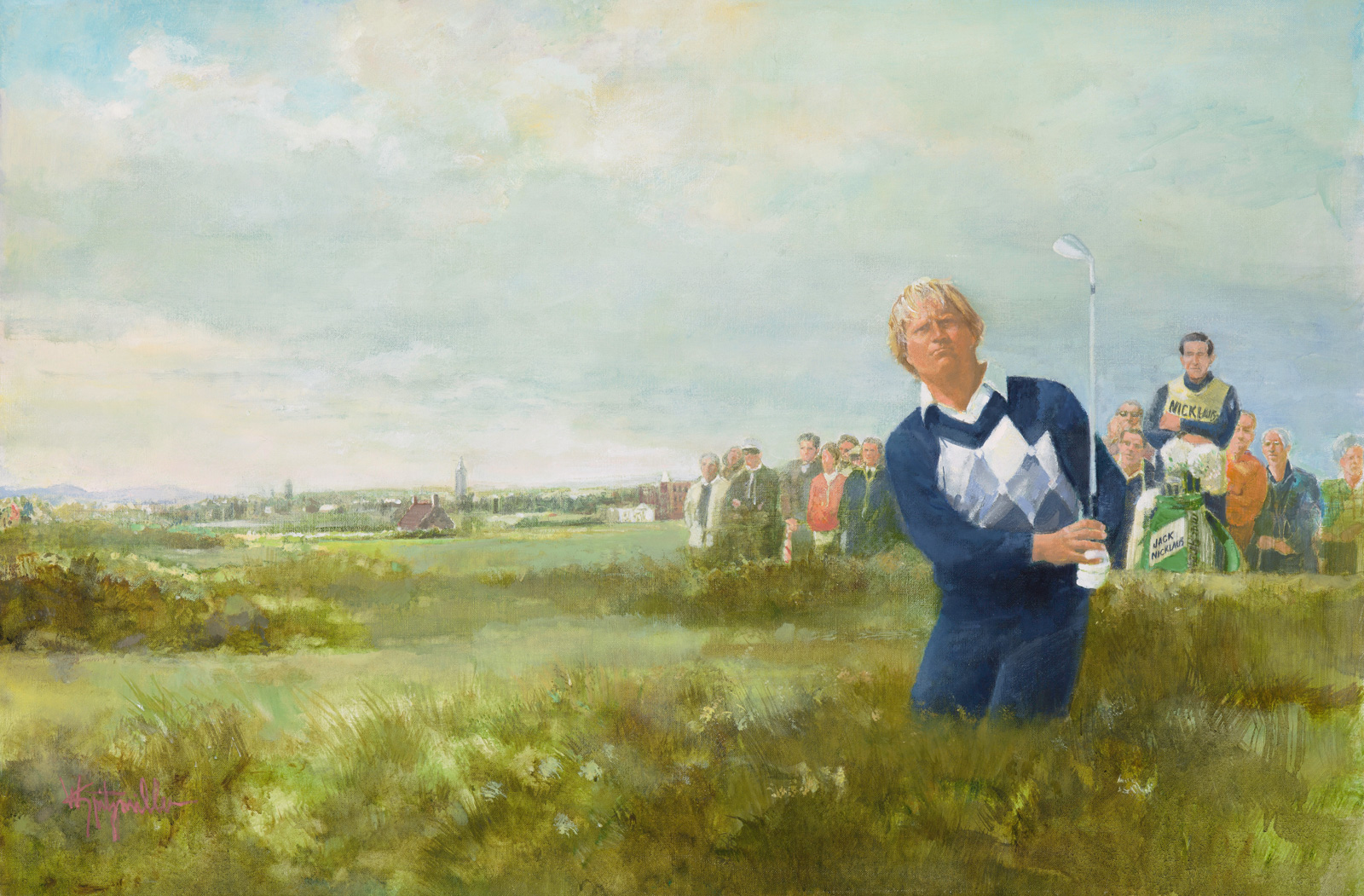 His work is widely held by private and corporate collectors, including many golf legends such as Jack Nicklaus, Arnold Palmer, Tom Watson and Lee Trevino. His iconic golf art captures the spirit of the game, its famous players and early legends, its fields of play and historic moments. 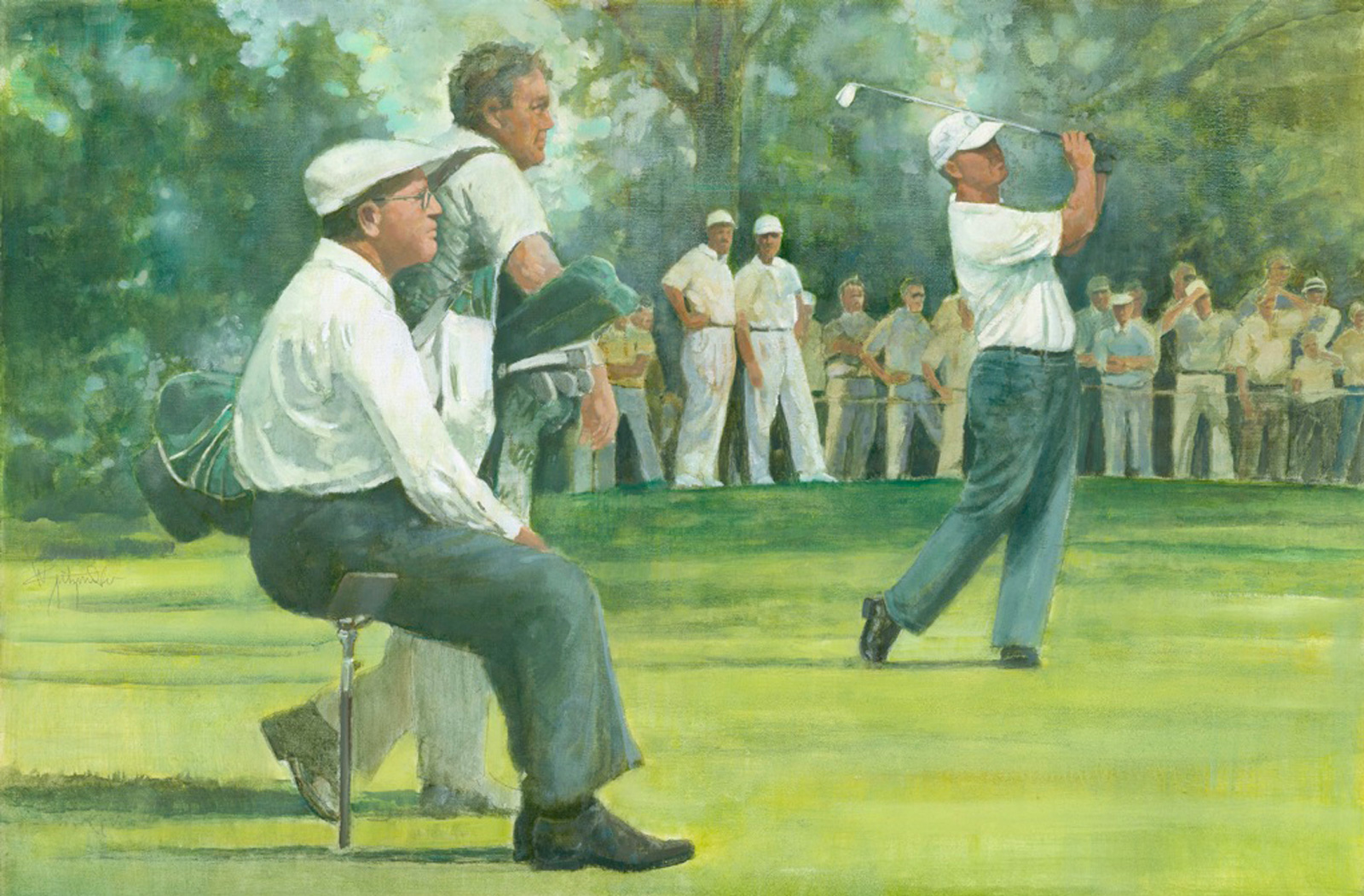 For many years, Walt’s art regularly illustrated stories in Sports Illustrated and GOLF Magazine, and he was the chief contributing artist to Senior Golfer Magazine, as well as a special contributor to Outdoor Life magazine. Additionally, Walt’s art may be found in the World Golf Hall of Fame, Baseball Hall of Fame, The Smithsonian Institute, The American Museum of Illustration and the Rodeo Hall of Fame. Walt resides in Bonita Springs, Florida.

In this article:Featured, Jack’s Majors