Yes, “Street Golf”.  I know what you are thinking, because before I conducted this interview I chuckled as well.  But consider this, once surfers and their enthusiasts also scoffed at the Lords of Dogtown, that insane band of anarchist surfers who preferred to do their surfing on wheels.  They eventually revolutionized skating, and skateboarding as an extreme sport was born. Now the Lords are truly considered to be royalty.  Fast forward, a few fashion trends and a decade or two later and we have Street golf.  It is the newest of the extreme sports and although obscure to mainstream-traditional enthusiasts it boasts a global following.

Street Golf originally appeared in Germany in 1990.  It then spread through the United Kingdom like a wild fire; consuming all of Europe within five years, before hopping across the pond to the United States.  Unlike traditional golf, street golf utilizes rigid balls in transforming the city into an obstacle course.  Pretty wild, huh? You have not heard the half of it.  Although Street golf is not the pariah that it once was, its players are still considered to be “outsiders”.  This does not concern the La 19trou street golf crew at all.  As a matter of fact they welcome the publicity, no matter what kind it may be.  They are positive that it would attract the type people that they are looking for.  The street golf crew has come a long way, but realize that they still have a long way to go.  After meeting in a chat room, La 19trou street golf crew was born and the founders have not looked back since. 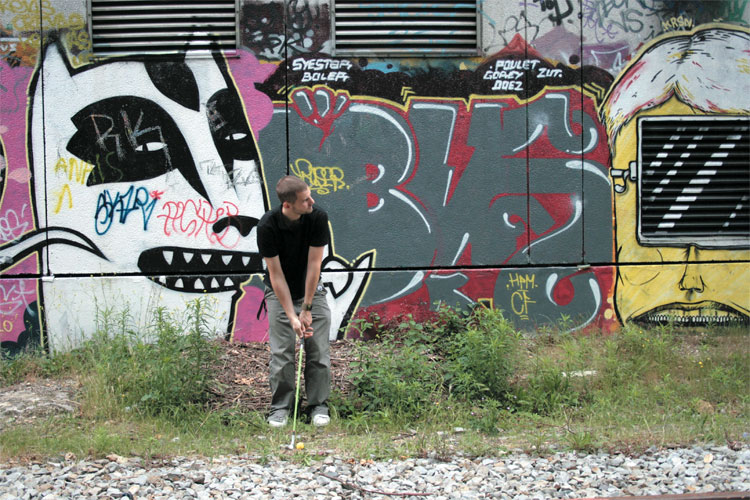 After chatting with Phil or Skyop for ten minutes you won’t wonder why he is the leader of a group that is dominating Europe’s newest and most radical sport, street golf.   Skyop who works as an Artistic Director for the magazine BLACKPOOL exclaims, “I love the game because it is a sport that anyone can participate in at anytime.  There are no Country Club restrictions”, says Skyop.  Only, don’t let Phils laid back persona fool you.  He might be one of the best Street Golfers playing.  While interviewing several of the crew on who they thought were the best I got the feeling that no one member wanted to say.  Yet, Skyops name was consistently on each member’s lips as pretty good.  So I take it that the guy is pretty great. Especially, considering the respect that he receives from the La 19trou street golf crew, who might be not only the best in Paris, but also the entire continent. Hey! I know what you are thinking, but I have never seen Tiger bank one off of a les ordures peuvent (garbage can). 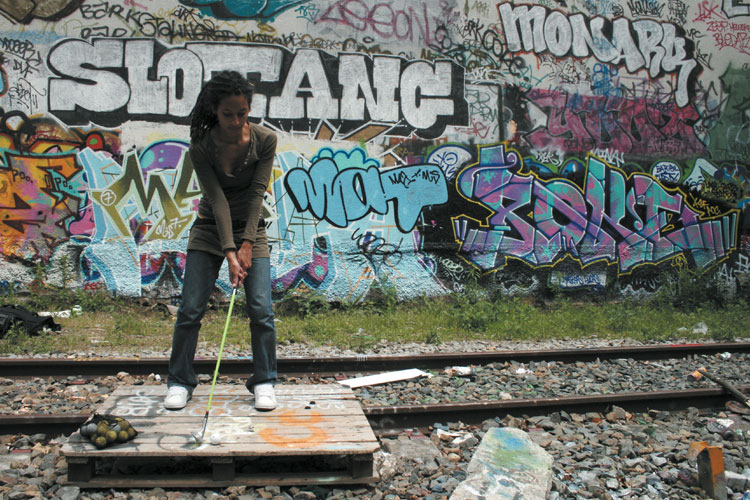 Allow me to introduce you to Sandrine Herbert.  Sandrine is an industrial and interaction designer, who took up the game of golf as a newbie.  Not only had she never played street golf, but the traditional game of golf was foreign to her as well. So it made it more difficult for her in the beginning. But no one could ever accuse Sandrine of being a quitter; her drive was as remarkable as well her drive.  Now she can be considered one of the best in Paris. “Sköyp and Paulo, who have a lot of experience in traditional golf, are better than me. But I’d say that I’m also talented, because I’d never played golf before and I had to learn many things to play in the street (it was harder for me.” Unlike the guys Sandrine has an added challenge to the game, her gender. “I’m the only girl of the crew. So I’m fighting against golf prejudices. Prejudices that say that golf is a sport for rich people, for men, and so on. And I keep promoting street golf by girls, because there are too few girls in that urban sport”.

Obviously, one cannot overlook street golf as being an unconventional sport, but that is perhaps what makes it perfect for Paul-Henry Braendel.  Braendel or Paolo as he likes to be called would be the first to admit that he is a professional golf instructor, who is very kind, and generous to family and friends and most of all crazy as Hell.  That is why when he discovered the game of street golf he took hold with both hands and did not look back.  He lives by the age-old creed of what ever does not kill you makes you stronger, so he is always up for a new challenge.  The native Parisian is the epidemy of eccentricity.  As an avid extreme sportsman young Paulo was always looking for the next best thing, but it looks like he has found his match with street golf.  He can play it anywhere and everywhere and he loves it.  But more than that it is a release.”  I can play the game anytime I want, everywhere I want.  If any of you readers out there are up to the challenge, entering the Paris Pro Tournament Master Classic would be a great idea.  Just keep in mind this guy plays for keeps. 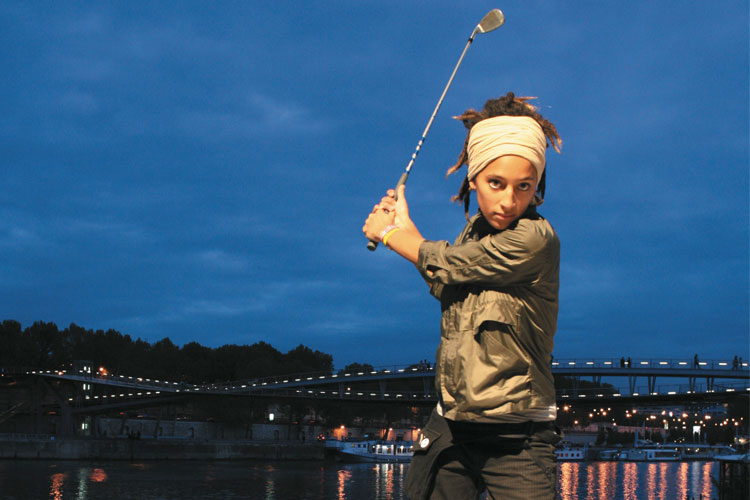 If any of you have ever heard of a “quiet storm”, it won’t be difficult to describe Pierrick Le Drian. Le Drian, an avid golfer and also one third of the administrative triple along with Skyop and Sandrine is one of the only Parisians.  What most people don’t know is he is a D.J. by profession, but his heart belongs to street golf.  In a word to see Le Drian in action is simply amazing.  Yet he is one of the most humble people you would like to meet and also not unlike Skyop, he is a romantic.  “Travel is a big part of my life. I just spent a year in San Francisco and I don’t want to stop there.  There is so much stuff to see and so much life to live in this world! Additionally, I love food and wine with some good friends. For me this is living.”

Pierrick and Kevin Lefortun, the resident jack-of-all-trades and fifth member of this motley team, had known one another for years and joined in with the rest of the team members through an online chat session.  It seems to be the consensus that the meeting felt as if it was Heaven sent.  Lefortun, who could not be reached at interview time, has to be the greatest guy in the world.   Each team member speaks of him in a way, which is almost reverent.  Given the opportunity I am sure would agree with his crew members that street golf has changed his life as well.

Ironically street golf is not only a game, but can be seen as an exercise in self-expression, a movement against tradition, and a counter culture.  People the world over have been bombarded with images of the privileged and well to do as golfers, but street golf says, “Golf can be for anyone”.  For some it is a state of mind, which consists in adapting an activity that seems inaccessible, or held for a certain category of people. For others still, it is a brief form of expression. But for the La 19trou street golf crew, it is the essence in which people, young and old, black and white, rich and poor can have fun by making a statement. The Paris Pro Tournament Master Classic is held once a year, but the “the La 19trou street golf crew” plays every week and would love to give you a run for your money.

In this article:GOLF ISN'T A SPORT FOR JUST RICH PEOPLE