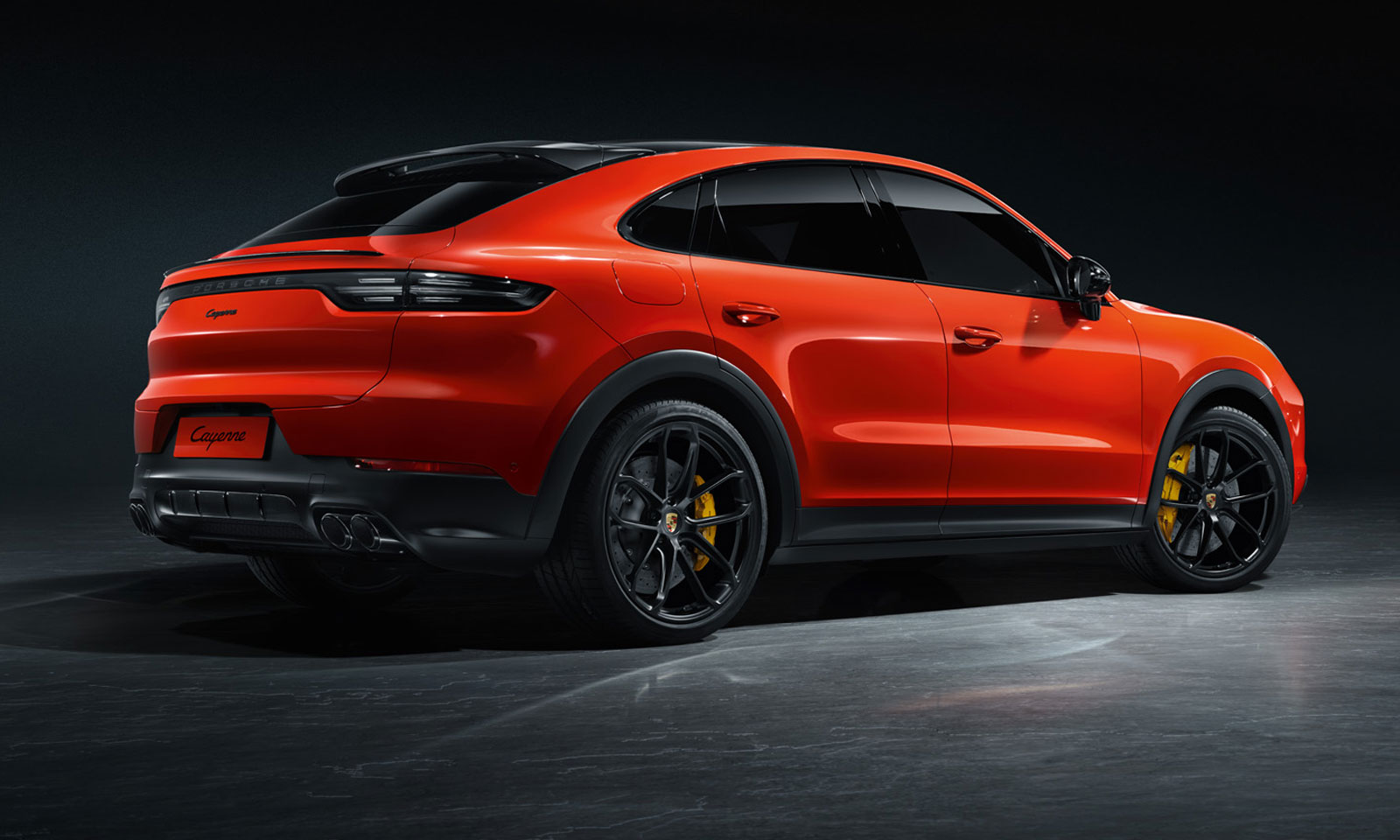 Four-door coupe designs are rarities in the SUV world, and that’s precisely why Porsche is extending its unique Cayenne model line of SUVs to include a new Coupe body style. “The Coupe includes all the technical highlights of the current Cayenne, but has an even more dynamic design and new technical details that position it as more progressive, athletic, and emotional,” says Oliver Blume, Chairman of the Executive Board of Porsche AG. The highlights of the new model include sharper lines with a redesigned rear section, an adaptive rear spoiler, individual rear seats, and either a panoramic fixed glass roof fitted as standard, or an optional carbon fiber roof.

“The significantly more steep roofline that falls away to the rear makes the Cayenne Coupe appear even more dynamic, and positions it as the sportiest-looking model in the segment,” says Michael Mauer, Vice President Style Porsche. That effect is supported by a roof spoiler, which accentuates the distinctive Coupe silhouette. The front windshield and A-pillar are shallower than in the Cayenne, courtesy of a roof edge that is roughly 0.78 inches lower than the standard design. Redesigned rear doors and quarter panels broaden the shoulders of this vehicle. The license plate bracket is now a part of the bumper, creating the visual sense that the vehicle sits lower to the ground. 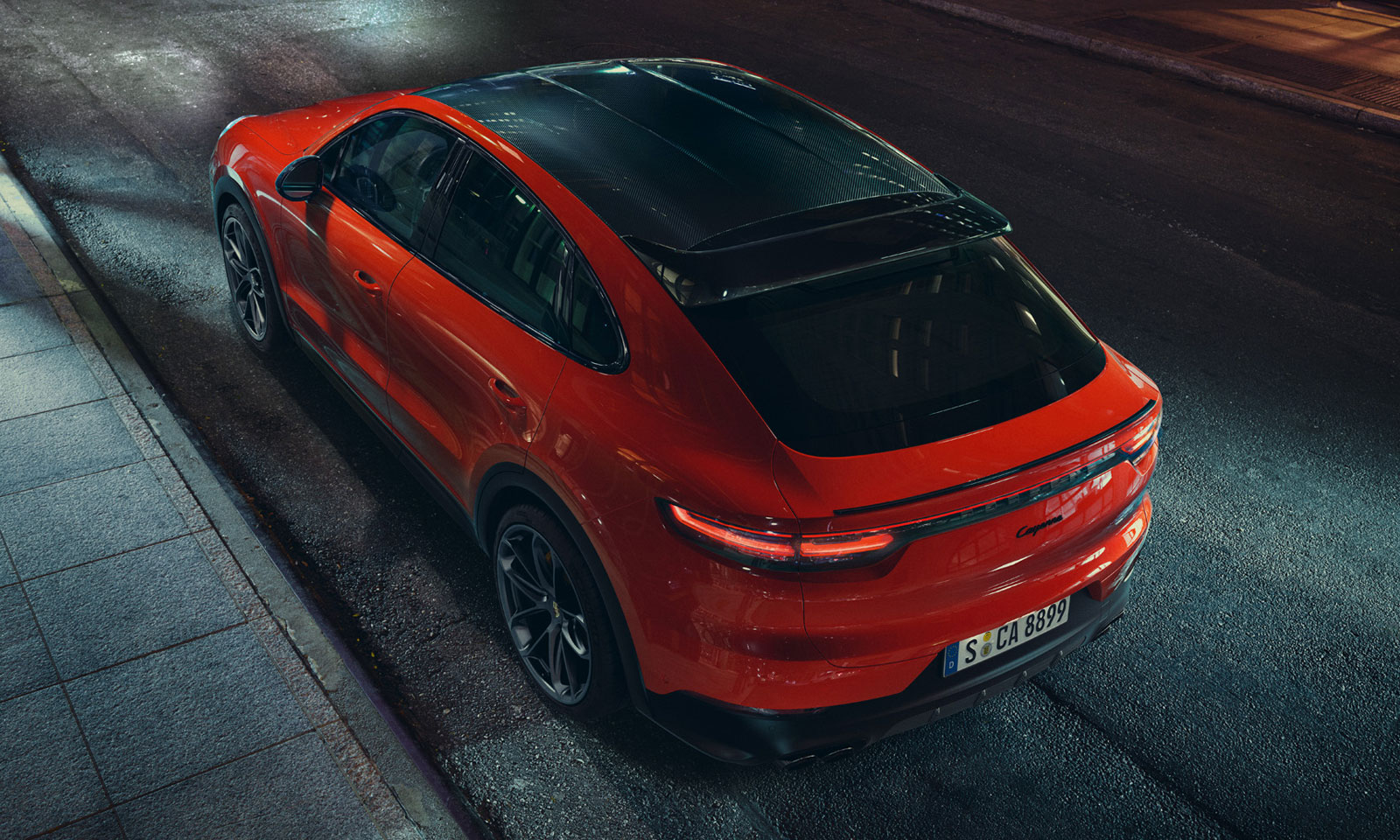 The current Cayenne Turbo was the first SUV to feature an adaptive roof spoiler, a concept the new Cayenne Coupe adopts and adapts to the new design. Each Cayenne Coupe model features both a roof spoiler and a new adaptive rear spoiler as part of Porsche Active Aerodynamics. The spoiler extends by 5.3 inches above speeds of 56 mph, increasing downforce to the rear axle.

The new Cayenne Coupe comes with a large panoramic fixed glass roof as standard to create a sense of space. To protect occupants against sun exposure, there is also an integrated sunshade. For the first time, the Cayenne model line is also available with a carbon fiber roof as an option offered exclusively with the Coupe models. This option is available in one of the three lightweight sports packages. These packages also include the Sport Design features and new, weight-reduced 22-inch GT Design wheels, fabric seat centers in Pepita, and carbon fiber and Alcantara® accents in the interior. For the Cayenne Turbo Coupe, the package also includes a Sport Exhaust System. 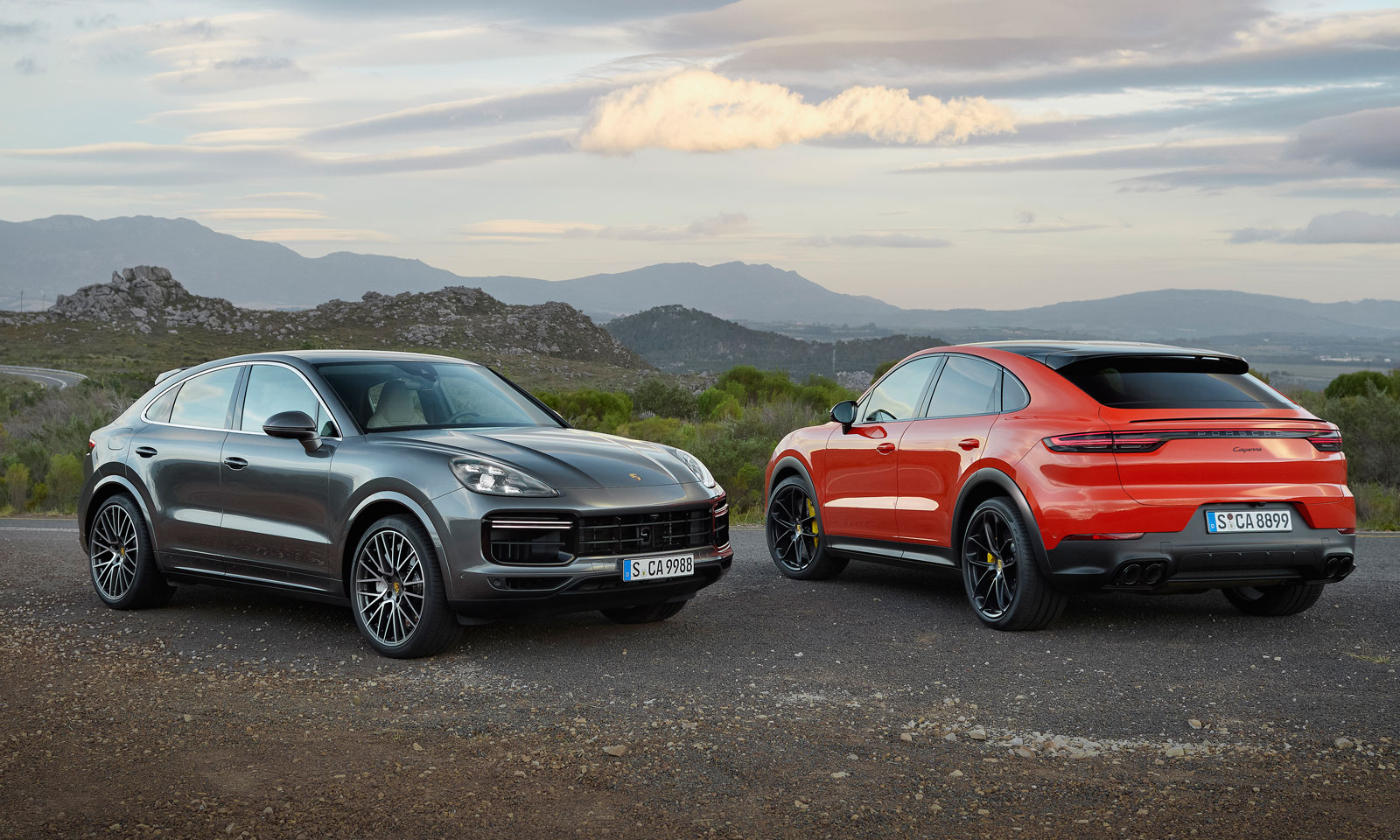 Building on the already well-equipped Cayenne, the new Coupe variants include upgraded standard equipment. Porsche Active Suspension Management (PASM), the Sport Chrono Package and 20-inch wheels are part of the starting MSRP of the standard model.

New for the Cayenne Coupe models, eight-way Sport Seats are standard equipment in the front. The new seats, which are similar to the 18-way Adaptive Sport Seats that are standard equipment in the Turbo model, offer generous lateral support and feature an integrated headrest. In the rear, the Coupe comes fitted as standard with a rear bench that has the characteristics of individual seats. Alternatively, the comfort rear seats – a familiar feature of the Cayenne – are available as a no-cost option. 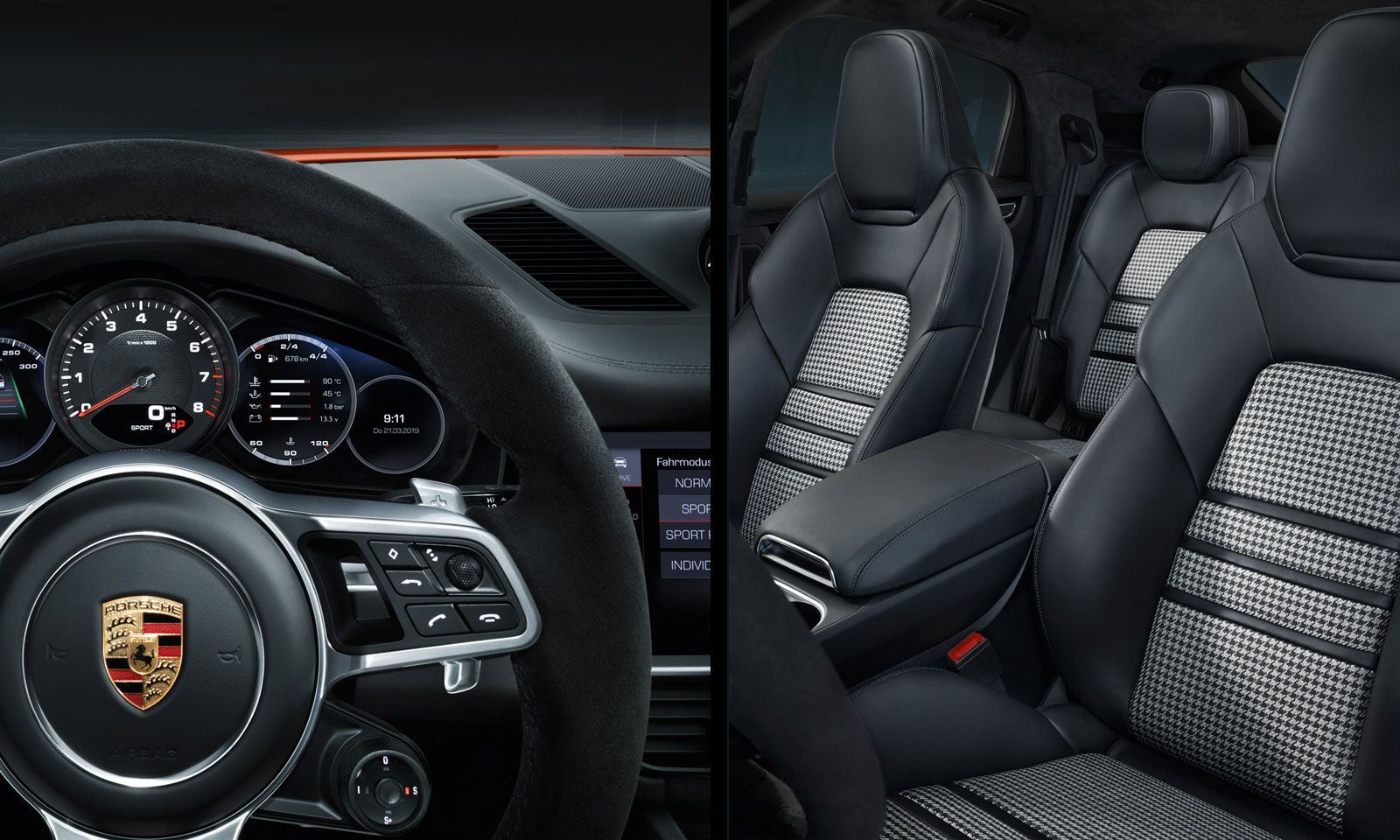 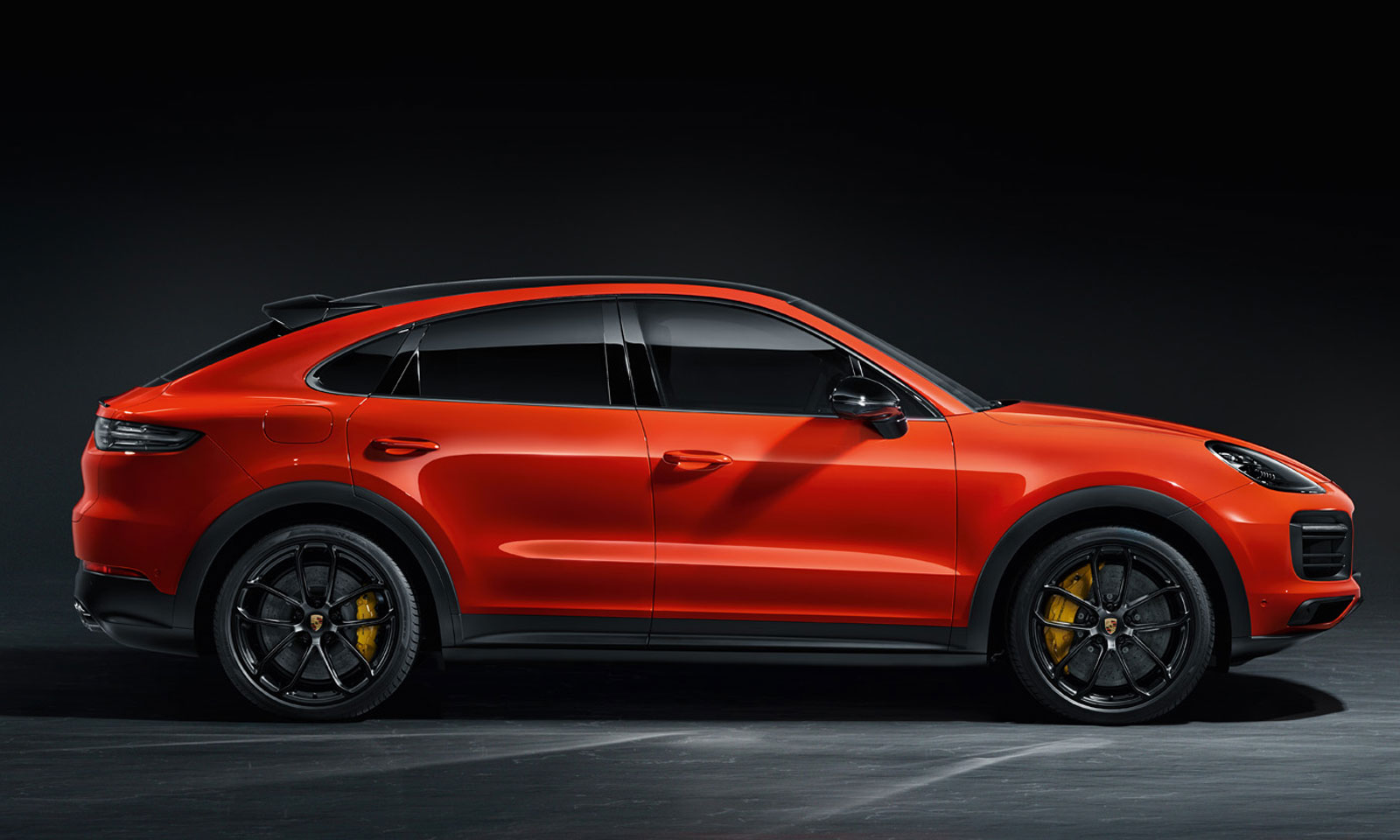 All Cayenne Coupe models will come with the Sport Chrono Package as standard equipment. Two high-performance engines are available at market launch.

The new Cayenne Coupe is expected in Porsche U.S. showrooms for the 2020 model year in the fall of 2019.