Cruise The Riviera With Wally, The Ultimate Super Yacht

Iconic And Uncompromising, Wally Has Transformed The World Of Motor Yachts

With over-the-top-contemporary-luxury and speeds of 60 knots or 75 mph. Agent 007 would approve. There is one school of thought that states if you are going to make a statement, make one that everyone will remember. Well, in a nutshell, that’s what you can say about Wally yachts. When the Wallypower first showed up on the French Riviera, jaws dropped everywhere. And when the owner, the firm’s founder Wally Bassini, put the pedal to the metal and opened up the throttle, onlookers were further amazed. They heard not one but three jet engines (in this use are called gas turbines) spool up as it leapt to speeds of 60 knots. With all three turning, you have 16,800 HP making it one of the fastest motor yachts ever built. 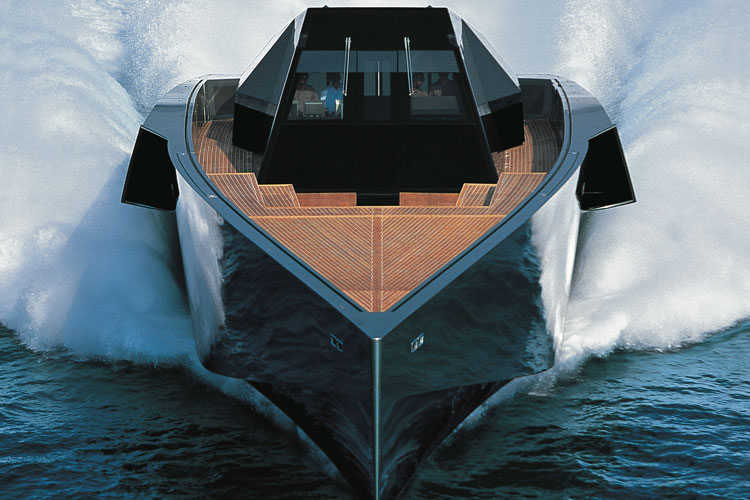 Naturally, you wouldn’t want three jet engines on for long or they would drain the tanks in an hour at top speed. In maneuvering or long deliveries, the steerable outboard water jets have more conventional Cummins diesel engines of 370 HP each. Actually, you can order it without the three jet engines and just the diesels and save a pile of money—then it was only $16.55 million dollars.

At first glance it seems to be missing most of the deck gear such as cleats and winches, anchor, and other equipment, but everything is hidden to keep the lines clean. In fact the entire deck is flush except for the angular cabin. Instead of compartmentalizing, the Wallypower’s deck, cockpit, navigation, dining and salon areas are all contained in one long room.

You enter the Wallypower through a sliding door at the rear or a lifting door at the front. The main dining and lounging cockpit is put forward of the superstructure, providing maximum privacy as well as being in the coolest area at anchor away from the engines. 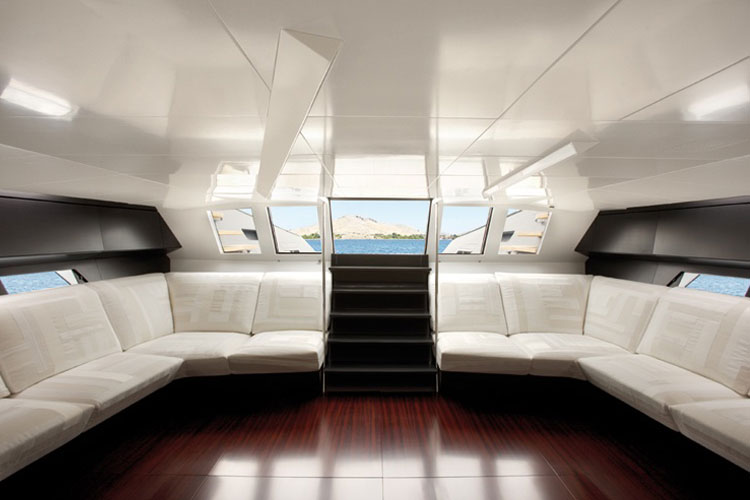 The Wally interior is a minimalist design by Lazzarini & Pickering. Throughout the owner’s statement, two guest cabins and main entertaining areas, you get the feeling you are in a multi-million-dollar loft high in Manhattan. There’s enough teak throughout to provide that indoor-outdoor feeling; in fact, guests enjoy a 360-degree view of the outside.

When the boat is at anchor, sections of the bulwarks alongside the superstructure can be lowered hydraulically to bring more light into the cockpit and double as diving platforms. This yacht is big enough to have its own “garage” holding a small inflatable raft or “tender” for going shore.

Intermarine, makers of military naval craft, constructed the Wallypower, which may explain its almost military stealth-fighter look. The boat’s hull was tested at the SSPA facility in Goreborg, Sweden and its above-water configuration was wind tunnel tested at the Ferrari facility in Maranello, Italy.

The Wallypower uses a lot of lightweight materials including from the waterline up, a hybrid fiberglass/carbon composite with balsa core. The superstructure is made of laminated glass with carbon frames. Bassini chose to be distinctive in color schemes, as well. As most big yachts are painted white, this one is a dark, metallic green and changes in color depending on the light.

Wally Yachts–after making their debut with the 118 – Wally wisely started on a series of other powerboats, a 47, a 70, a 90 and so on. Iconic and uncompromising, Wally powerboats has transformed the world of motor yachts.

FIND OUT MORE ABOUT WALLY YACHTS AT: WWW.WALLY.COM