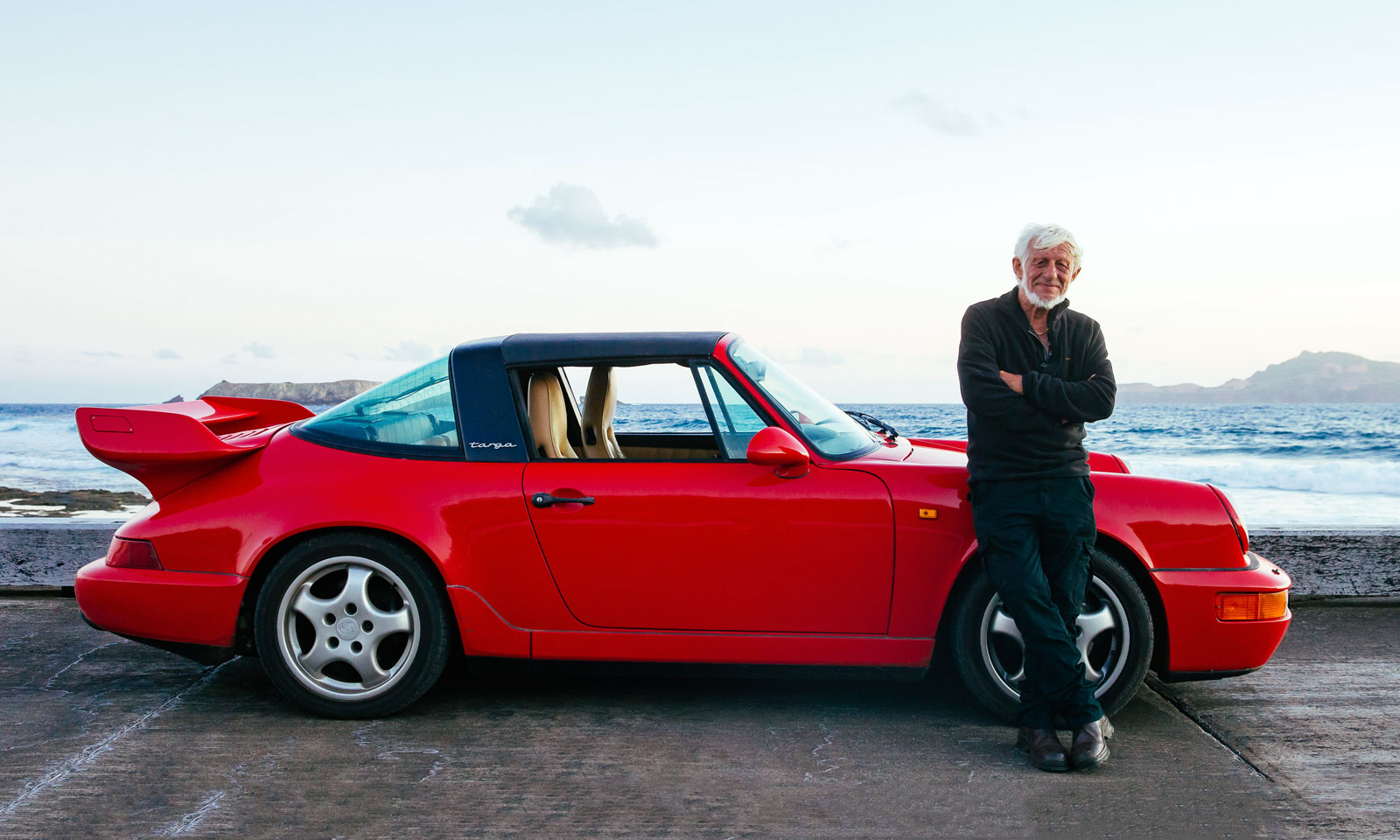 Located in the South Pacific Ocean, Norfolk Island is approximately 870 miles east of Australia. The nearly 22-mile tract of land was created by volcanic processes, and today is home to 1,800 inhabitants, one set of traffic lights, around 150 cows – and just one Porsche. Cows have the right of way on Norfolk Island, not cars.

Duncan Sanderson stands on the quay wall in Cascade Bay, looking out over the roaring Pacific. The former jeweler recalls fond memories of standing at precisely this spot 22 years ago, with the red Porsche hanging from a cable overhead – though the experience was a somewhat stressful one at the time. The offshore coral reef generally makes it difficult for large freight ships to deliver goods to Norfolk Island, and incoming products often have to be unloaded onto several smaller vessels before being brought to shore. 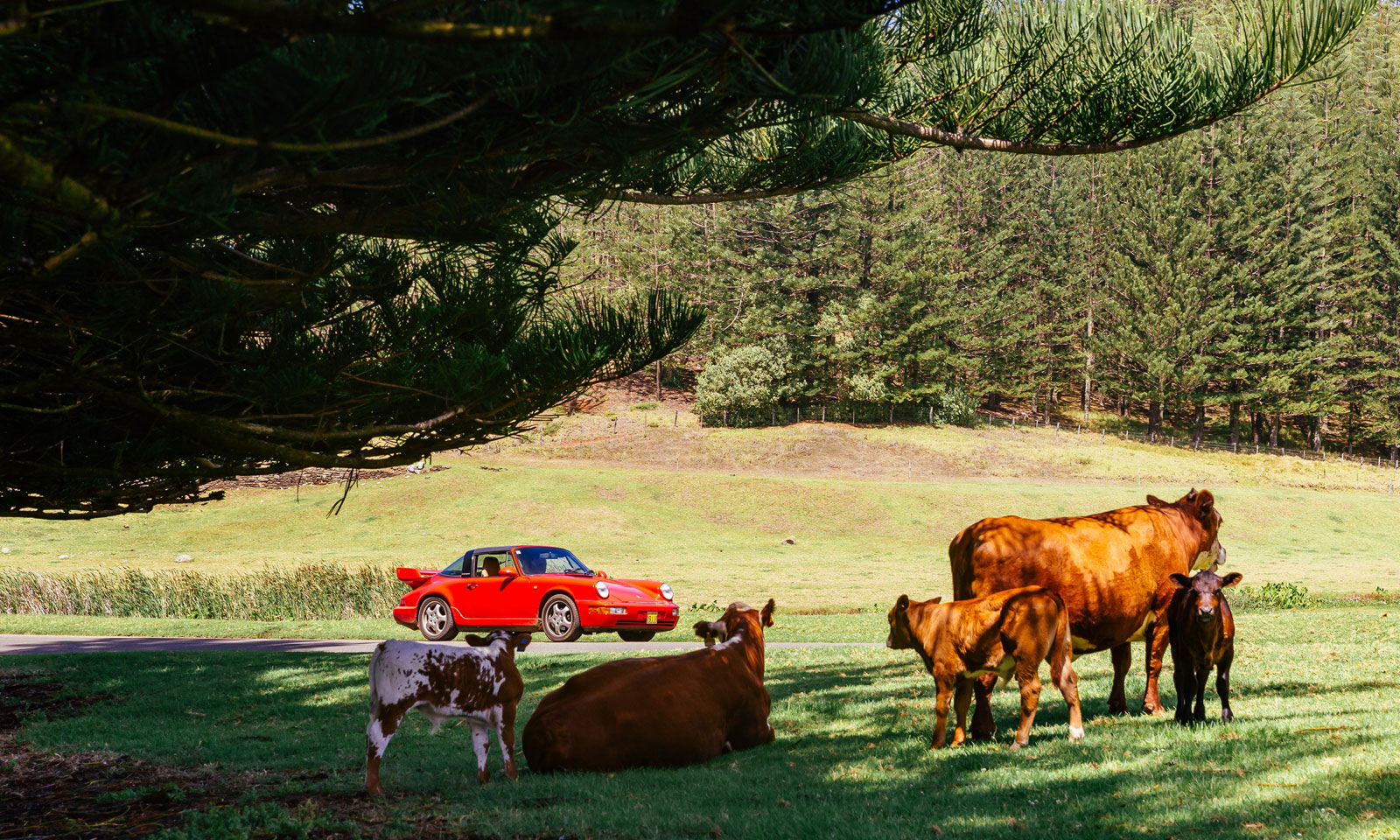 “The Porsche was finally hoisted ashore by crane; I held my breath as I watched it dangle over the sea,” the 75-year-old says with a smile on his face. The Sandersons were actually looking for a delivery vehicle for their jewelry business, as they browsed a Japanese auction site. “I happened to notice that the auction was selling various Porsches. Of course, it’s a sports car I’ve always dreamt of – ever since I was a young child,” Duncan recalls. Then in 1996, the dream was suddenly a reality before his eyes – if only on a computer screen that first time: a red 964 Targa. Duncan considered it for a long time, and eventually placed a bid and won the sports car.

“You can imagine how my wife reacted,” he recounts with a wry wink. “But when the 911 actually arrived, and she laid eyes on it, she was as ecstatic as I was.”

“It turns out that the Porsche was the best thing that could have happened to our business. There’s no communications strategy, however well thought-out, that could have matched the Porsche,” Sanderson notes. “The Targa and its large rear wing were a real magnet for passers-by. People would constantly come into our shop and ask about the Porsche – which, of course, I’d always park right in front of the door.” 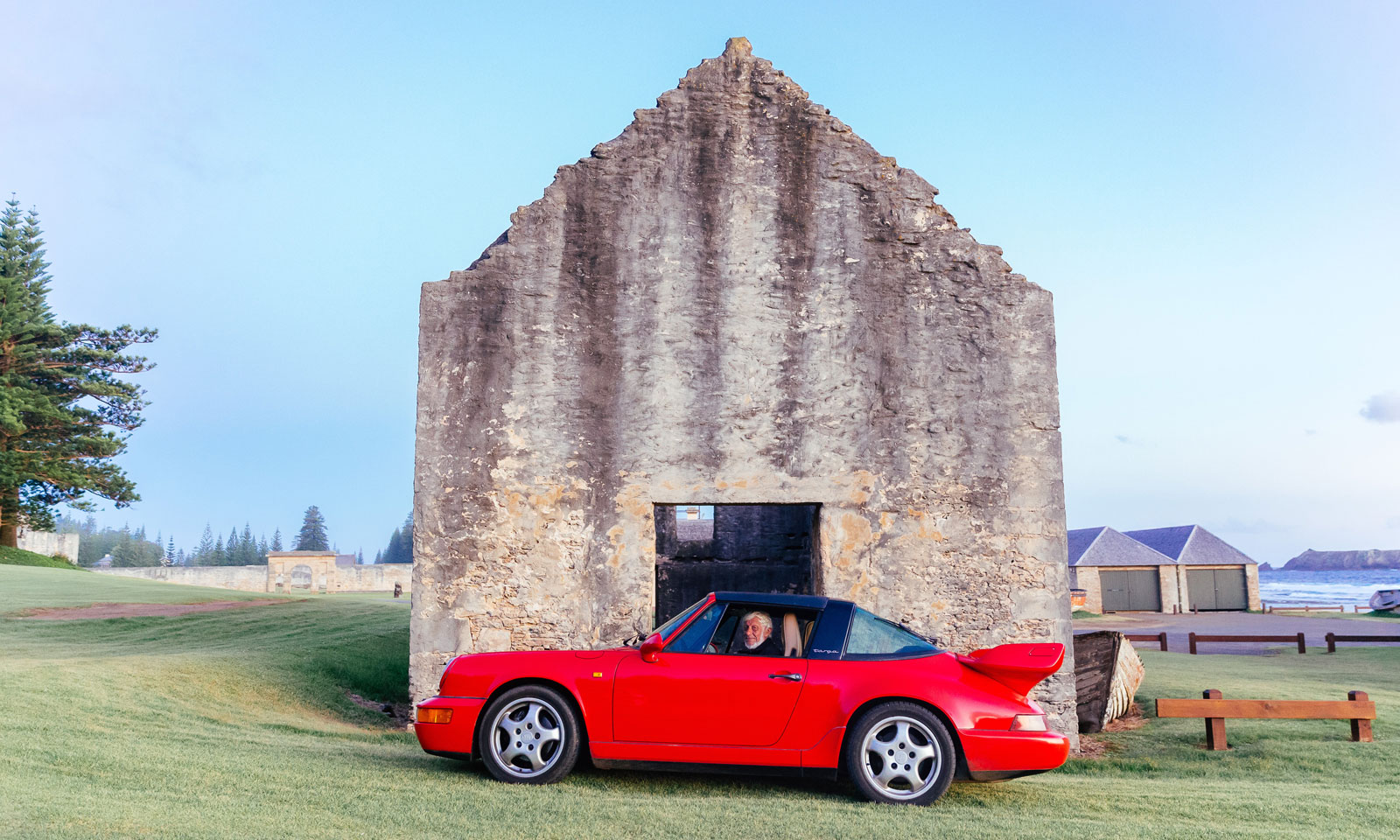 The Norfolk Island road network is limited, as is the speed permitted on it: all 90 miles of road on the island has a maximum speed limit of 50 km/h (31.7 mph), while inaccessible cliffs and rugged mountains also mean that only the southern part of the island is inhabitable. That doesn’t make things easy for Duncan, who likes to take the Porsche out for a spin every day. “You have to be a bit creative on Norfolk Island. Sometimes I wish there was a bit of motorway in the middle of it, so I could really let the Porsche fly. But I’m getting older, and these days I really just enjoy my time with the car. The thing is, every drive in a Porsche is unique, so I’m constantly rediscovering my 911 and the place I call home,” the islander comments.

“People know that I sometimes like to drive a bit quicker, but I haven’t got any speeding tickets so far. You have to keep an eye out for the cows though, as they can suddenly appear out of nowhere.” 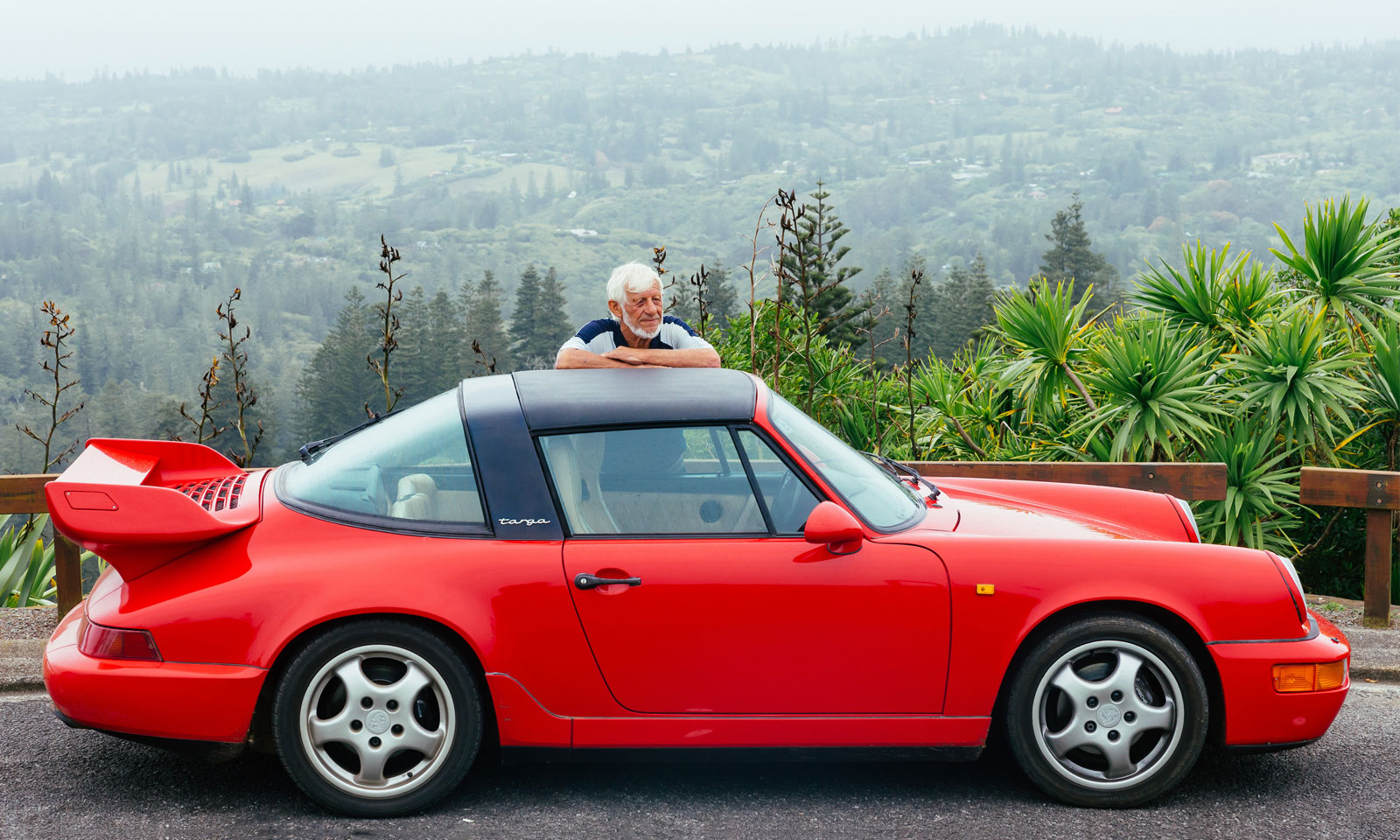 Although the leisure activities available on the small island are not exactly extensive, Duncan Sanderson loves this spot. He likes the people here, believing them to be a bit more neighborly than in a village, and very warm and welcoming. All he needs to be happy is 35 km² and 6 cylinders. With that, he climbs into the sports car of his dreams and continues to enjoy his idyllic island life. Because whether he heads for Mount Pitt – Norfolk Island’s highest point – or along the Pacific Ocean to Kingston Pier and Cascade Bay where he took delivery of his Porsche that first time 22 years ago, Duncan believes that the Porsche 911 is the jewel of Norfolk Island. 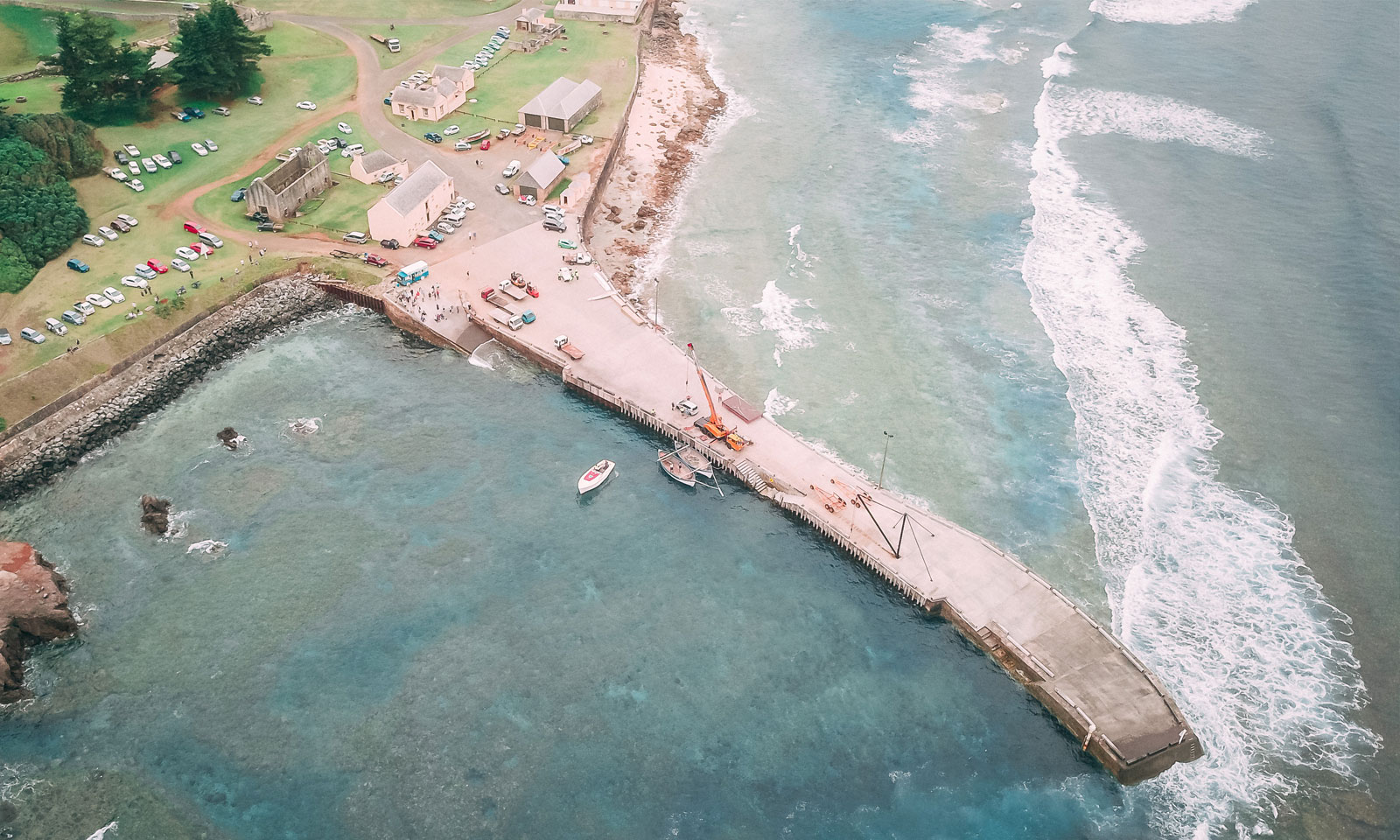 Norfolk Island is a sub tropical island paradise, abundant with stories, activity, and character. The island is only a 2.5 hr flight from Australia or 1.5 hr from New Zealand.