In an event that prides itself on long-standing traditions, due to the pandemic, this year’s Masters Champions Dinner is going to be unlike any other.

Golf’s revised calendar means cold November winds will replace the usually pleasant conditions that come with the tournament’s normal April start and its spring bouquet of blooming azaleas, and, for the first time ever, no ‘patrons’ will line the fairways at Augusta.

Thankfully though, one of the great Masters traditions remains: The Masters Champions Dinner.

In a custom that began in 1952 with defending champion Ben Hogan, every year past Masters winners sit down together at Augusta on the Tuesday night before the tournament starts for a meal, with the menu chosen by the reigning champion.

Members of the Masters Club are the only people invited to attend, an elite group that includes past Masters Champions and the Club Chairman – a very exclusive club that all golfers would love to belong.

This year’s Champions Dinner will take place on November 10, two days before the season’s final major tees off.

Choosing the menu for the fifth time in his career is Tiger Woods, who triumphed in iconic fashion last year and is 25/1 in the golf betting to win again this year. 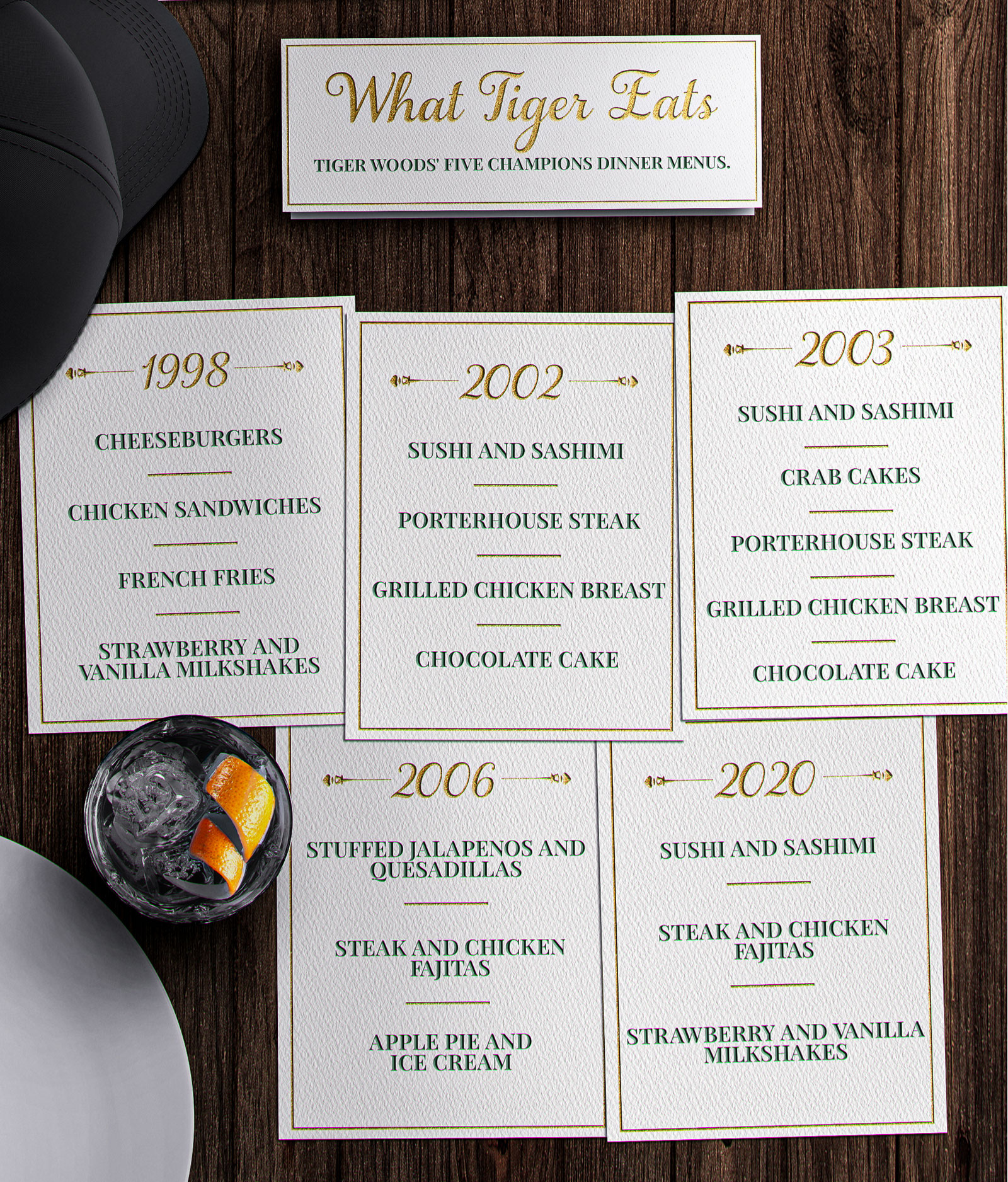 Woods’ has opted to serve sushi and sashimi to start, steak and chicken fajitas for the main course followed by strawberry and vanilla milkshakes.

It’s a fun menu, and while he has already served all those dishes in previous menus, it must be difficult to come up with something new when you’ve hosted the dinner five times. (Maybe a pre-Thanksgiving dinner of turkey would’ve hit the spot).

In 1998, after his first Masters win, Tiger served cheeseburgers and chicken sandwiches, French fries, and the milkshakes that he is bringing back this year.

Sushi and sashimi kicked off his 2002 and 2003 menus, which both also included porterhouse steak and chocolate cake.

And in 2006, Woods went for a Tex-Mex theme featuring stuffed jalapenos and quesadillas to start, those steak and chicken fajitas that return this year, and apple pie and ice cream for dessert.

Woods’ menus follow a Champions Dinner trend, in that they convey a real sense of national pride as the majority of champions choose to serve traditional food from their home country.

Back in 1986, Bernhard Langer was one of the first players to really personalize the Champions Dinner menu when he chose wiener schnitzel (breaded veal) and Black Forest cake, a pair of German favorites.

From Down Under, in 2014, Adam Scott flew in his personal preferences from Australia to accompany the New York strip steak – Moreton Bay Bugs. The name did not sound appetizing, but he claimed they’re just insect-like lobsters.

As the only Canadian to win a major championship, Mike Weir, in 2004, served up a lot of big game from the Great White North as elk and wild boar were the main courses. For the less adventurous foods, there was also fried chicken and filet mignon. And naturally a selection of Canadian beer. 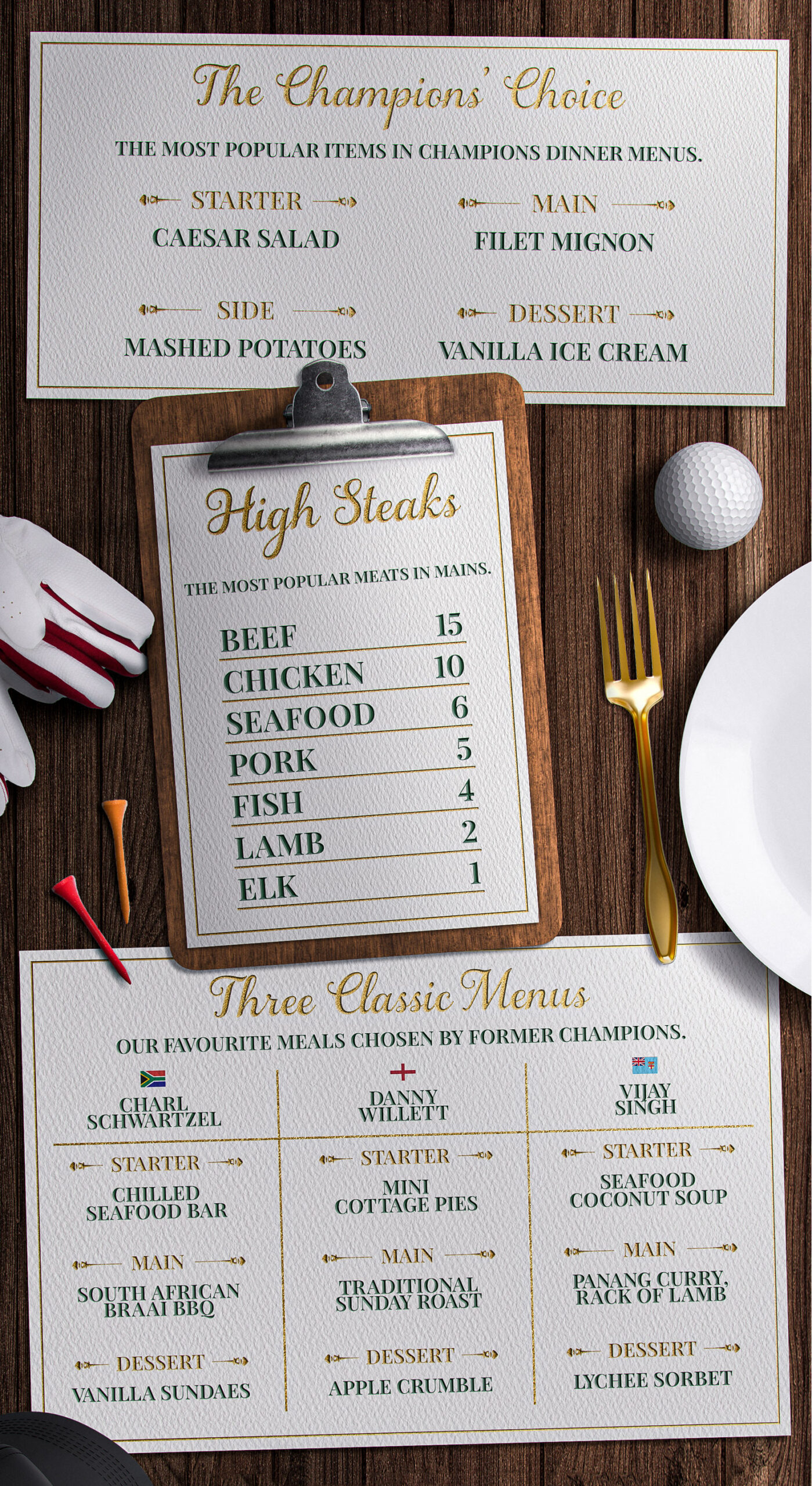 American winners like Fred Couples have honored their heritage.

In 1993 Freddie paid homage to his Italian roots by serving chicken cacciatore with spaghetti on the side (his paternal grandparents immigrated from Italy and changed their last name from Coppola).

These menus certainly provide us an insight into who these players are and where they come from.

Bubba Watson’s 2013 menu was the Champions Dinner’s nadir. The left-hander from Florida served Caesar salad, grilled chicken breast with corn and mashed potatoes and confetti cake for dessert, which Nick Faldo described as a “happy meal.”

For what it’s worth, Faldo served tomato soup and fish and chips when he was the champion in 1997.

Undeterred by Faldo’s criticism, however, Watson brought back the exact same menu when he won the Masters again two years later.

At a time when most golfers are incredibly carefully managed, and unlikely to open up about anything more interesting than clubhead speeds and pace of play, their chosen menu offers a rare glimpse of what makes a champion’s mouth water.

In this article:Masters Champions Dinner