A DARK, SULTRY AMBIANCE IMMERSED IN CONTEMPORARY WORKS OF ART

[dropcap size=small]A[/dropcap]rt and collectibles have always stood out well against stark white rooms, and a white background has been a time-honored display method since the contemporary movement brought us out of the Victorian era.   Always thinking ahead of the pack, creative ad gal, Cindy Gallop, was sipping her drink in her favorite Shanghai bar one night and the inspiration hit her that the same dramatic art display could be achieved with an opposite twist.  If she could have the dark, sultry ambiance she so loved in that same Shanghai bar, it was how she wanted to live.

When she got back to New York, she purchased a 3,800-square-foot loft in a re-purposed 1904 YMCA building, space that was formerly the men’s locker room.  She then grabbed designer Stefan Boublil by the hand and gave instructions to make the Shanghai bar happen.  Armed with carpentry materials and multiple finishes in shades of black, the building’s new owner went to work building out the loft and covering it in black carpet, black high gloss paint, black tiles and a touch of Chinese red lacquer. High Drama! Cindy then added her extraordinary art and oddities to create one of the most unique homes in the city.

It wasn’t long before the Black Apartment became a media star, sought after by “HGTV,” “Dwell,” “New York Magazine” and “The Atlantic.” It was also used as a set in “Law & Order” and was the backdrop in Notorious B.I.G’s video “Nasty Girl.”  The parties and birthday bashes Cindy held there were well-known among the social set where “hunky buff male models” acted as servers amongst all the glitter and glamor.

The opulent 3,800-square-foot loft has three bedrooms and three baths.  The master bedroom and bath have no walls but do have a drape system that can cordon them off should there be stay-over guests looking for the coffee pot early in the morning.  Grand open space for entertaining a large group in style. Gallop has recently put her home on the market after enjoying it for the last nine years.

The Black Apartment has been a media star with its own list of credits. Now for sale, priced at $5.995 million.

FIND OUT MORE AT: TOPTENREALESTATEDEALS.COM 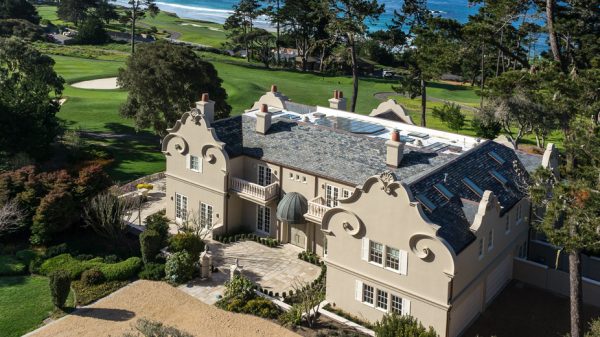 Live On The 12th Green Of Pebble Beach

A STUNNING ESTATE OVERLOOKING THE GOLF COURSE AND OCEAN   [dropcap size=small]B[/dropcap]e prepared for the next year’s Pebble Beach AT&T Golf Tournament, which is...