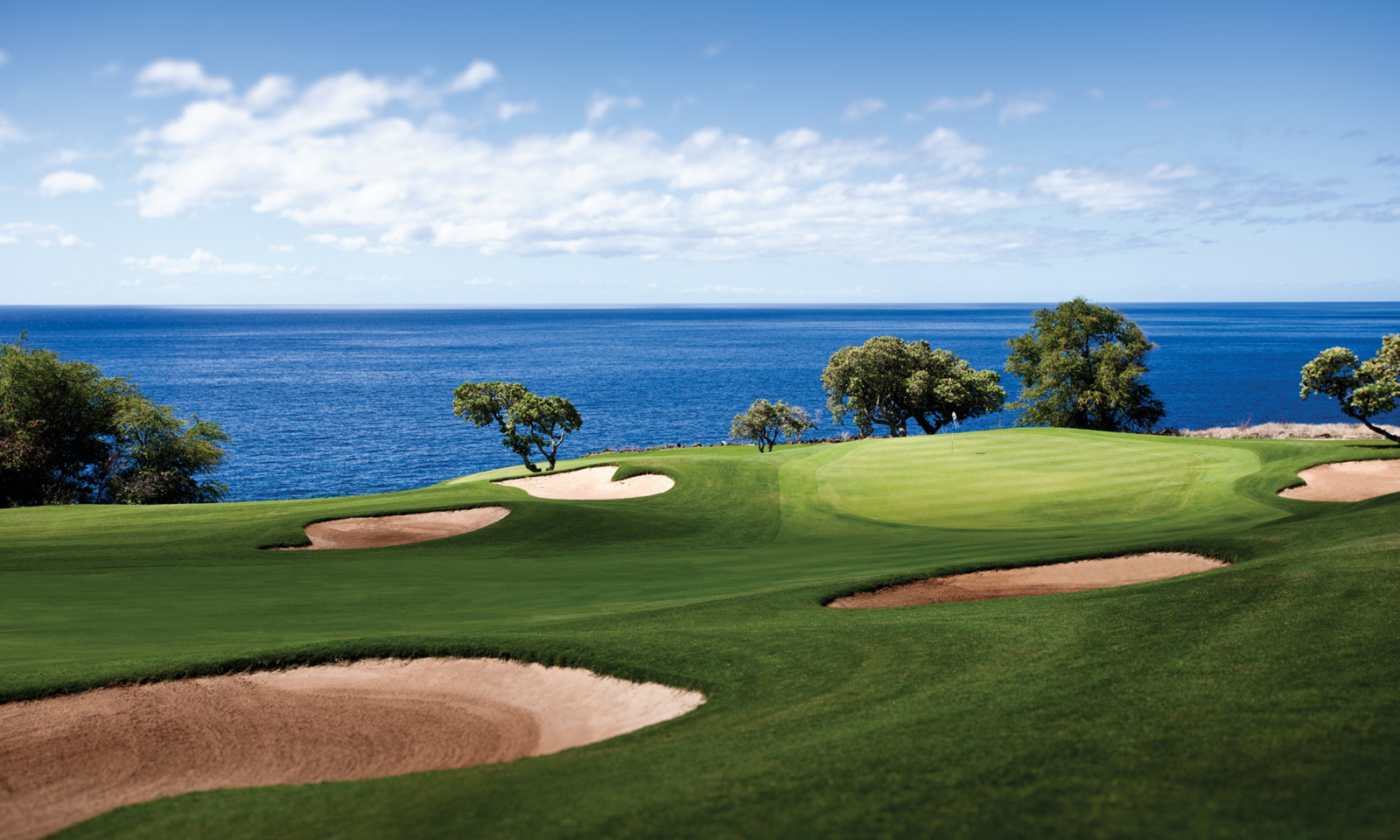 For his nuptials in 1994, zillionaire Bill Gates vowed, “I do” on the signature 12th hole of Manele Golf Course (formerly called the Challenge at Manele), a cliffside spectacle where the “fairway” is a surging surf 45 metres below. The camera-shy groom hired every helicopter and hotel room on Lanai in order to thwart peeping paparazzi. In 2014 he and Melinda returned to Lanai to celebrate their 20th anniversary.

My husband, William, and I also decided to make Lanai the destination for our 35th wedding anniversary. We played the Manele course, lost a few Titleists on the 12th and checked out the multi-million dollar renovations of the Four Seasons Resort Lanai. Heck, what’s good enough for Bill and Melinda is good enough for us. Mind you, while the Gates travelled by private jet, we took the 45-minute Expeditions passenger ferry from Lahaina on Maui’s west coast. There are five round-trip crossings throughout the day and if you’re lucky you’ll be escorted by a school of acrobatic spinner dolphins.

Golf with a View

Built on lava outcroppings above the crashing surf of Hulopoe Bay, the Jack Nicklaus Signature Manele Course boasts views of the Pacific from every turn. Three fairways perch on cliffs, including the infamous 12th.

We encountered back-to-back par-threes on the 7th and 8th fairways. We had to consider the trade winds when choosing our clubs on the 172-yard 7th. Number eight, at 210 yards, requires precision aim to nail the hillside green. Manele’s toughest hole, the par-four 5th took its toll on our scorecards. Your drive must go left to avoid the fairway sloping to the ocean. We won’t likely forget the 17th with its forced carry over a cliff. From there you must negotiate a serious dogleg right and avoid the water running down that side of the fairway.

After the round we enjoyed tropical cocktails with the obligatory little paper umbrellas at the aptly named Views clubhouse restaurant.

Little Lanai (only 29 km long by 20 km wide) packs a fascinating history. It’s been home to Hawaiian chiefs and a just a handful of owners.  In 1922, James Dole bought the entire island and turned it into a pineapple plantation. However, by the late 1980s the pineapple business had become economically unviable. Enter billionaire David Murdock, who purchased 98 percent of the island in 1985 and built two resorts, The Lodge at Koele and Manele Bay. He partnered with Four Seasons, who assumed management of both resorts in 2005. In 2012, Murdock sold Lanai to Oracle C.E.O. Larry Ellison. It’s a kind of pineapples to paradise, rags to riches tale.

Most discerning travellers would have opined that the accommodations and courses at both Koele and the Manele were just fine as they were, but Ellison decided to renovate. Koele and its Greg Norman-designed golf course are currently closed. Manele Golf Course remains open for play and the resort has undergone a multi-million dollar renovation and was recently awarded the rare and coveted AAA Five Diamond designation.

The walk from the lobby to our room was like a stroll through botanical gardens. We often paused to wish “aloha” to the exotic parrots or toss some nibbles to the koi in the pond.

Rooms have every possible convenience. Along with mahogany floors, teak paneling, high tech lighting, temperature and privacy controls, the state-of-the-art Toto toilets alone are worthy of mention. When you enter or leave the bathroom, a motion detector raises or lowers the toilet seat. A series of buttons on the wall remote panel control all sorts of flushers, washers and dryers.

We were truly spoiled by the dining options. We started our days on the terrace of One Forty overlooking a series of pools to Hulopoe Bay where we created fresh juice from tropical fruits and enjoyed the Eggs Bennie with seared tuna instead of pea meal bacon. For lunch we had pupus (Hawaiian appetizers) at the poolside Malibu Farm. At dinner we opted for Nobu’s inspired sushi and Wagyu beef seared on a lava rock.

Although golf was the main attraction there are plenty more activities at the Four Seasons including lei making, hula and ukulele lessons and tours of the botanical gardens. Snorkelling with complimentary prescription goggles is a must on what Yahoo and the Men’s Journal magazine rated the “best snorkelling beach in the U.S.”  It is just steps down from the resort on Hulopoe Bay.

In this article:Hawaiian Golf Nirvana