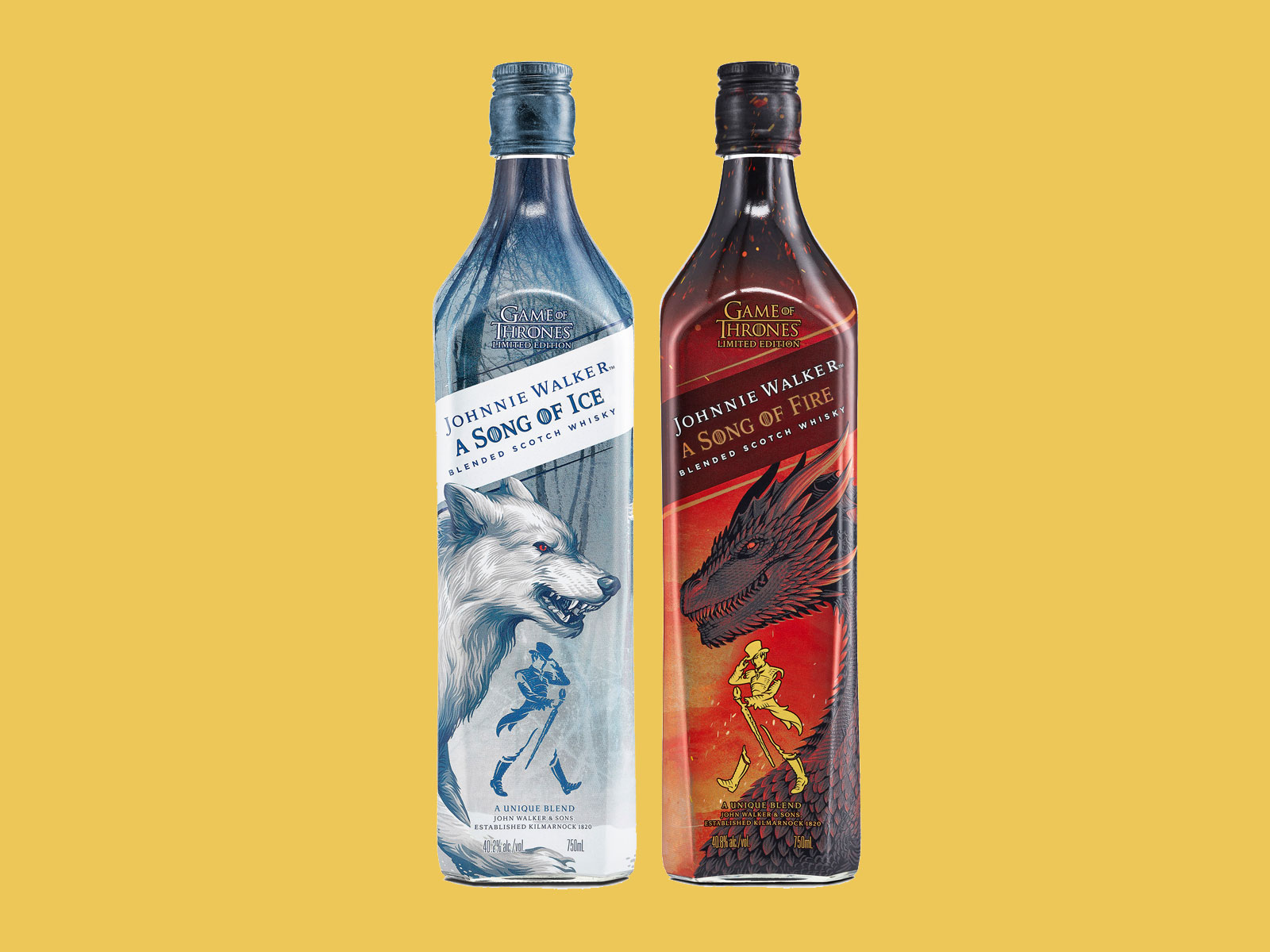 Johnnie Walker and HBO are introducing Johnnie Walker A Song of Ice and Johnnie Walker A Song of Fire, inspired by House Stark and House Targaryen in Game of Thrones. The two brands are uniting to introduce two new Scotch Whiskies to the realm in honor of the enduring legacy of the critically acclaimed series Game of Thrones. A continued collaboration with HBO, these limited edition whisky blends are dedicated to the iconic and powerful houses of Westeros – House Stark and House Targaryen – and are successors to the White Walker by Johnnie Walker limited edition blend launched in 2018. 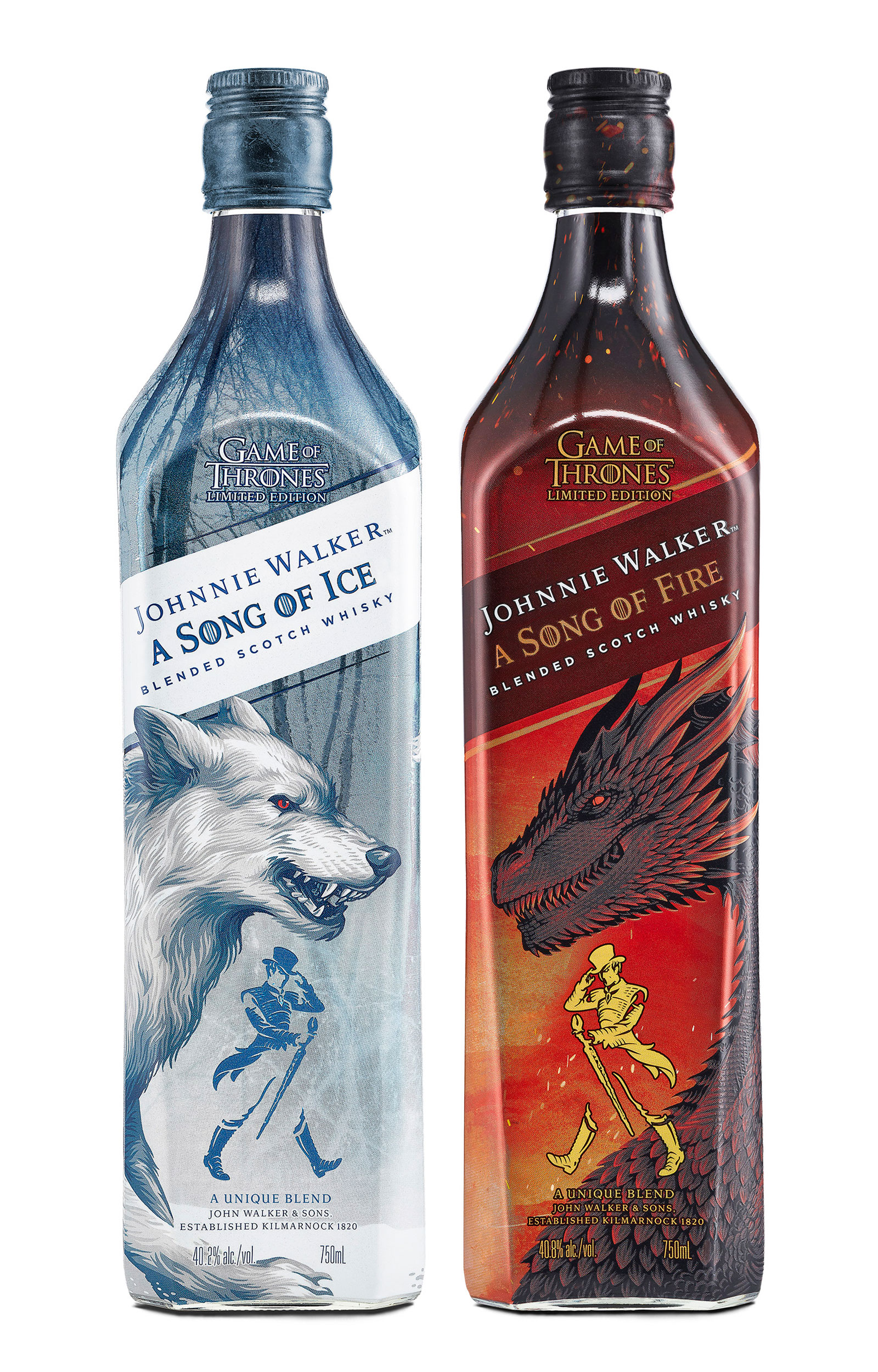 The bottle design evokes an icy setting with frosted blue and gray colors inspired by the North, known for its cold winters and frozen landscapes.

The Johnnie Walker A Song of Ice and A Song of Fire bottles convey the dynamic relationship between House Stark and House Targaryen, represented by their house sigils – the Direwolf and the Dragon – which face-off as a nod to the series storyline.

Whether in conflict or harmony, this is a tale of two great houses represented by two ancient creatures. One is a house descended from the First Men. Rulers of the North and builders of the wall, they thrive in the icy-cold climate of the Direwolf. The other, a noble family of Valyrian descent and the first royal house of the Seven Kingdoms. Fire courses through their veins and is made flesh in the form of their dragons.

From House Stark comes A Song of Ice, from House Targaryen A Song of Fire. Together, the two whiskies celebrate the dynamic relationship between the houses, represented by their house sigils – the Direwolf and the Dragon – which fiercely adorn each bottle. As another nod to the complicated interactions between the two great houses in the show’s storyline, Johnnie Walker’s iconic Striding Man uncharacteristically faces backwards on the A Song of Fire bottle, revealing a face-off with the Striding Man on the A Song of Ice bottle when paired side-by-side.

“Johnnie Walker and Game of Thrones are an epic pairing. There is as much for people to discover and explore within the world of whisky as there is within the world of the show,” said Sophie Kelly, Senior Vice President, Whiskies Diageo North America. “Johnnie Walker A Song of Ice and A Song of Fire perfectly capture the essence of House Stark and House Targaryen, from the bottle designs to the unique Scotch whiskies within. Each new blend brings to life a different profile of flavors – one crisp and clean, the other rich and spicy. We hope people enjoy trying both while reliving the series with friends.”

Johnnie Walker A Song of Ice features single malts from Clynelish, one of Scotland’s most northern distilleries, and exudes a crisp, clean taste like the unforgiving force of ice that shapes mountains and stops rivers. The new blend has an ABV of 40.2%, and the bottle design evokes an icy setting with frosted blue and gray colors inspired by the North, known for its cold winters and frozen landscapes. Johnnie Walker A Song of Fire is rich and spicy, boasting flavors of subtle smoke from the peated malts of the Caol Ila distillery with an ABV of 40.8%. Inspired by the dragons of House Targaryen, feared for their fire breathing, the bottle design evokes a fiery setting with deep-red colors.