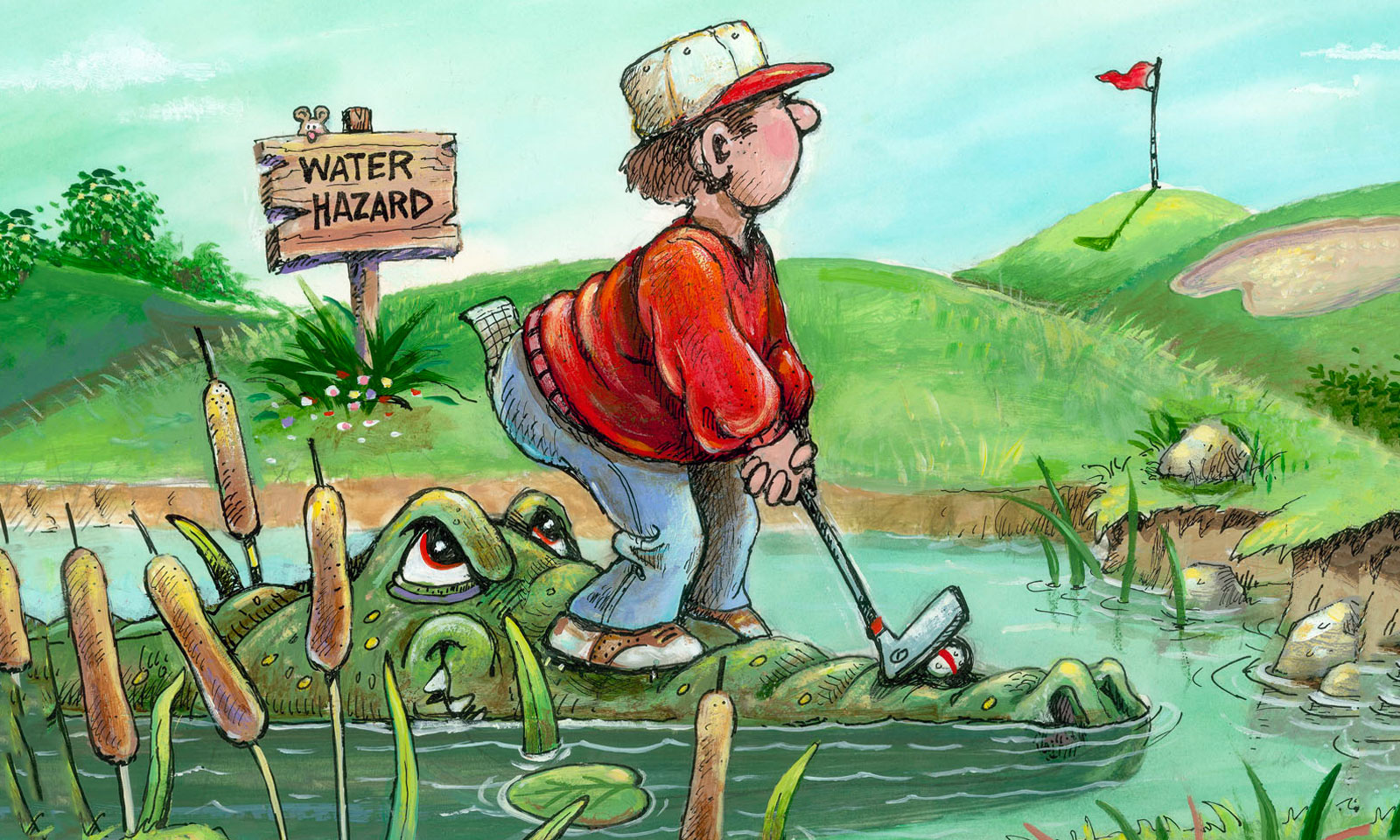 How do you retire from your work if you are one of golf’s most recognizable artistes and your studio overlooks the ocean where, as a form of relaxation and inspiration, you hone your swing by happily hitting balls from the beach into one huge water hazard?

Well, the answer is you don’t.

Gary Patterson, 74 and a self-admitted lifelong “hacker”, chose to pursue his passion because “it made people smile”, and has been doing a lot of smiling himself knowing how lucky he is to “toil” at his passion for the past thirty-something years out of his ocean-front place in Malibu.

Still at it day-in and day-out, the native Californian is very appreciative of his achievements because before his golf creations rocketed him to success, especially in the 1980s and 90s, like many artists, he struggled for a long time.

Encouraged by his family to formally pursue his artistic ability, Patterson attended UCLA and the Art Center College of Design for a short time, but soon ran out of money and went out on his own – learning by his own mistakes.

“Murals, signs, yes I’ve done all kinds of artwork. Painting numbers on curbs to try and make money. Yeah that worked. I got a bad sunburn and spilled paint all down the road.” the affable artist recalled with a laugh. “It is really rough being a freelance artist. While before I’d be jealous of those that made it, now I just admire them.” 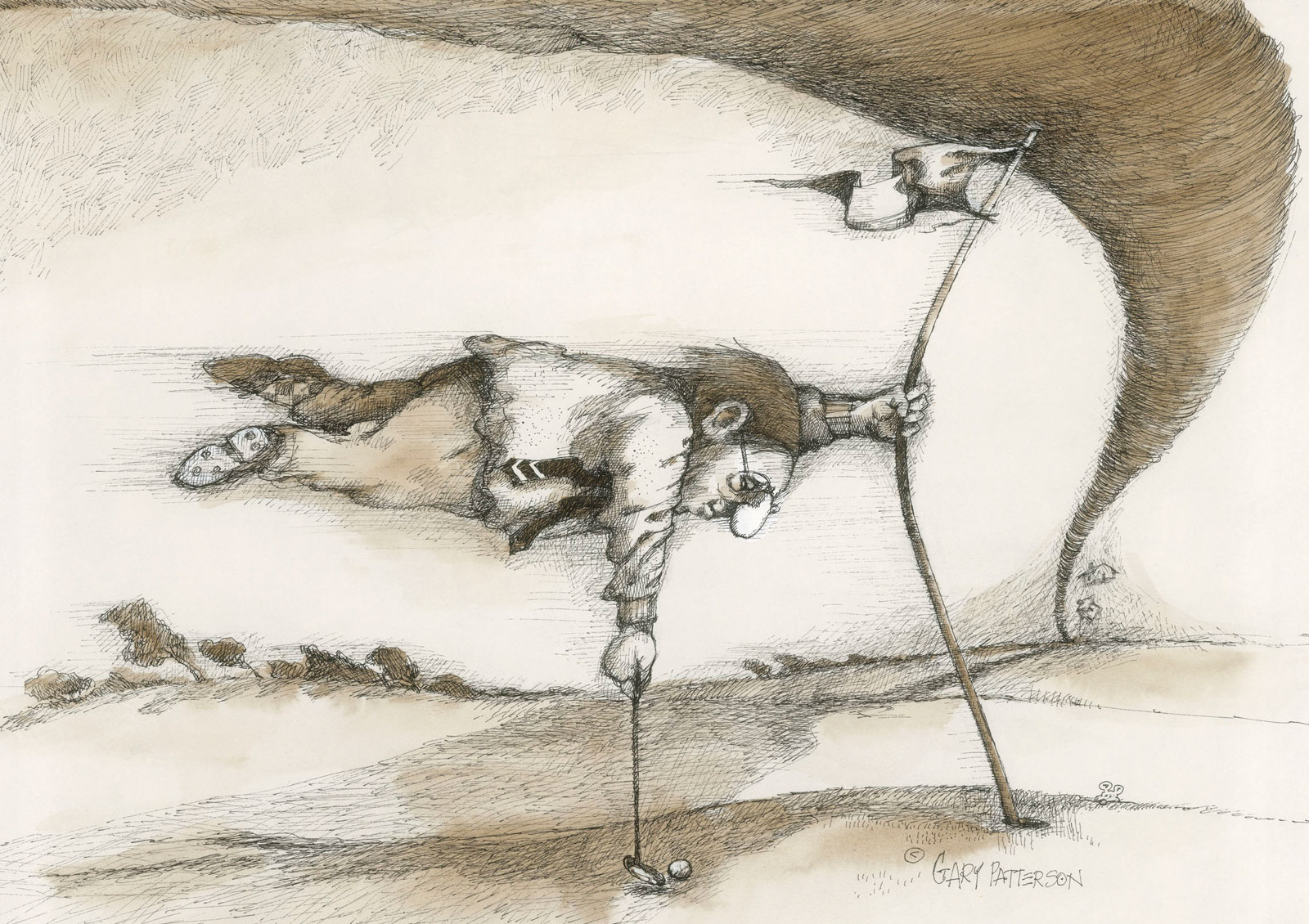 For Patterson, the pattern of converging golf and art was set at an early age.

“I learned about golf living over the Knollwood Golf Club in Granada Hills. The thing was I could see golfers teeing off below me, but they could not see me. Some throwing equipment into the water hazard then they’d try to retrieve it, others angrily tossing clubs after taking multiple shots to get out of the sand traps. I saw it all,” Patterson recalled.

“I had a great span to view and it was over a period of years, so it built a lot of memories mostly about the emotions this hard game draws out in players. In my youth, I’d often go down onto the course in the evening and practice with my dad or buddies. I’d leave a few divots here and there. We’d retrieve a ton of balls. I have never had to buy a single golf ball in ten years back then. As far as my own experience I am a hacker, straight on. I have experienced the many different emotions as well.”

Besides learning the sport from his father, it was also from his dad that he developed his artistic talents.

“My dad was a fireman and also a really good artist so I learned from him. I’d stand by the drawing board and observe him. It would just the same if someone was interested in music (where) they’d really benefit from someone who had a piano or guitar that played at home.”

“I soon had my own art materials,” Patterson explains. “He was a cartoonist. They were published in the all the firemen Grapevine Magazines. LAFD. So I grew up in that environment where my artist dad helped me.”

Though he’s enjoyed a lot of success creating art covering other sports, animals, office politics and assorted everyday life themes, the core of Patterson’s work has been golf which is recognized all over the world mostly because people that play the game can relate to the themes presented and those that don’t can certainly laugh at the easily universally-recognized topics. 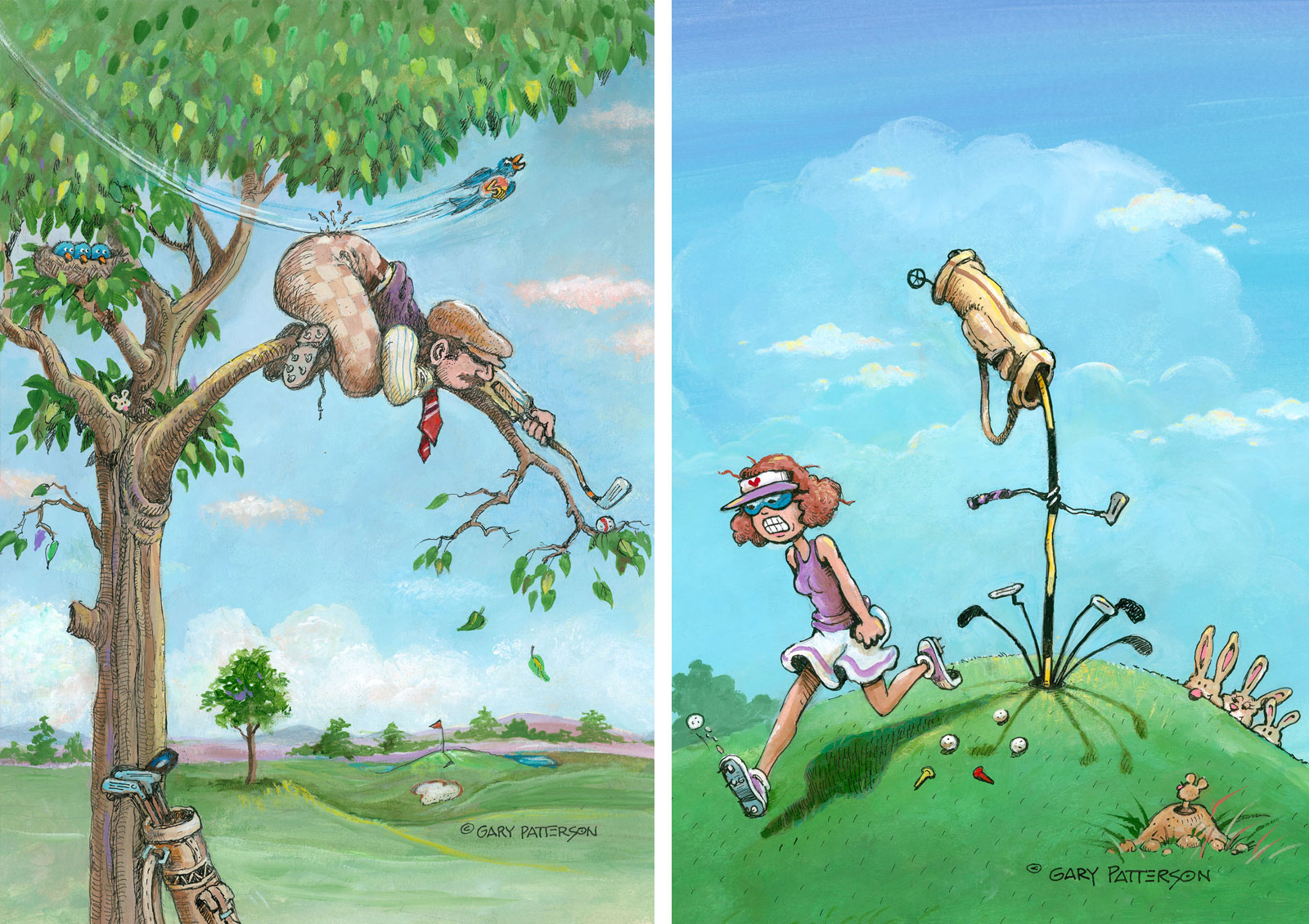 “Golf is really an important sport, so I put that into my program.”

One of the artist’s secrets is that he is very hands on and detailed in his research. As part of playing a round of golf, he’ll seek out groundskeepers, agronomists, course designers, caddies, fellow everyday hackers and club pros among many others to get their perspectives.

“The internet sure helps out, but it is really about getting out on the golf course and seeing nuances,” Patterson said. “When I work, I am trying to laugh with golf not at golf. It is a tough sport. But is also one of passion and I get letters all the time from club pros to weekend hackers. So I owe a lot to people all over who have provided input to my work.”

The sport is a great match for his exaggerated art style, but it is also one that Patterson relates to with fellow golfers because there are shared experiences both on and off the course.

“One of the universal components of the sport is frustration. When I was going through a divorce, rather than party around and make a fool of myself, I decided I was going to do artwork I just didn’t know exactly what. I’ve done animals which I love and a lot of different sports too, but I decided on golf. I spent a lot of time on a specific piece I called it out of bounds but I have never tried to sell it and hangs in my studio.”

Though his artist father is his biggest creative influence, Patterson counts several others having an impact on his creativity.

“My dad is first, but the Old Masters are great and I do like Rockwell,” Patterson said. “Charles Schulz, the Peanuts creator, and I have exchanged original artwork.” 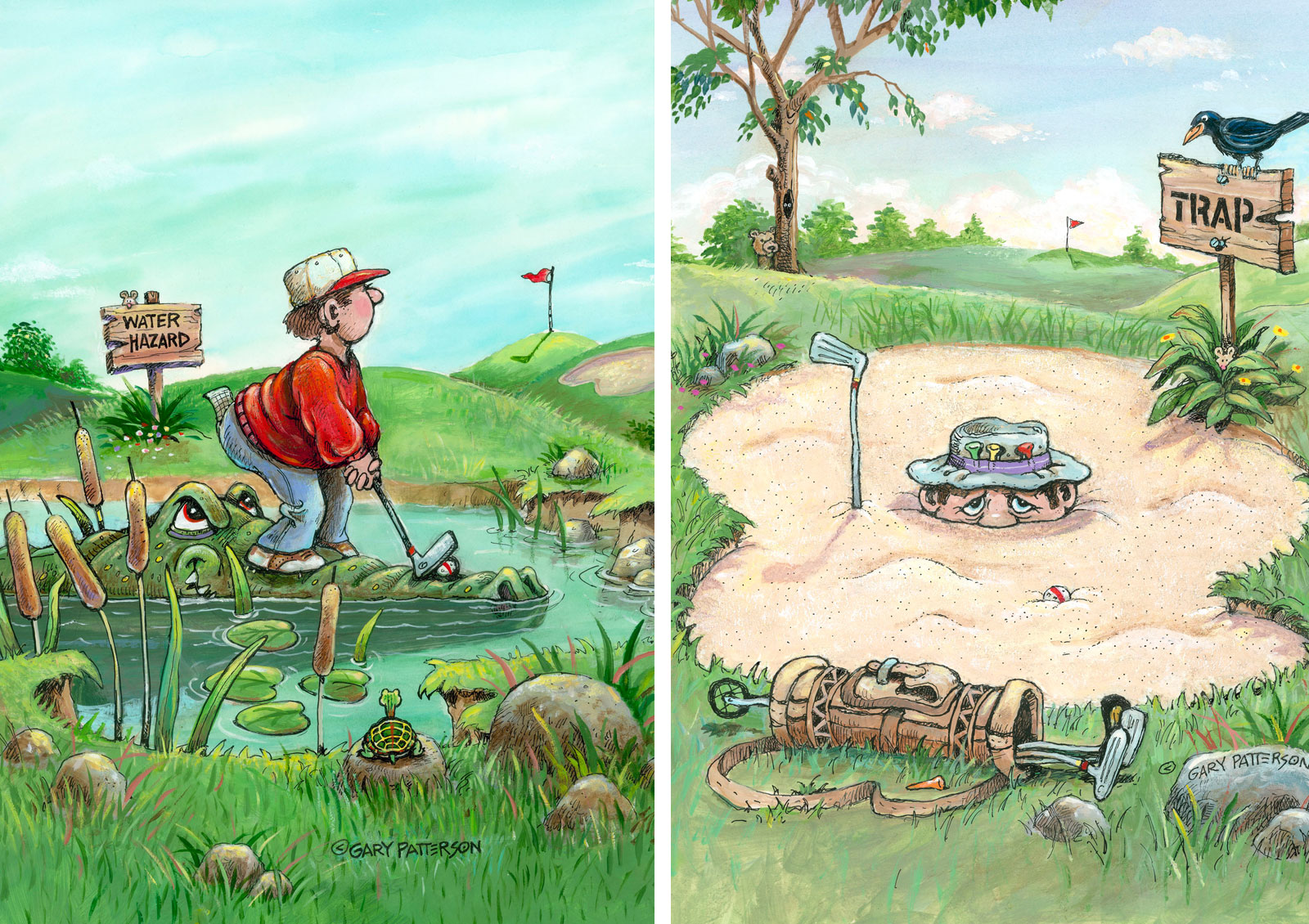 These days, in between teeing off from his oceanfront studio into the water and watching the sport on television, Patterson remains active combining his two passions.

“I have about five projects going at the moment,” the artist beams with excitement. “Golf is still important to me and my specialty being humor really continues to draw me in to the sport all these years later. The game is so challenging that you have to have a sense of humor.”

One of the keys to his success is that the artist covers topics that most fellow golfers have experienced, whether they want to admit to it or not. And Patterson is pretty clear about what he hopes people get from his artwork.

“Identification. If I draw something and they go “I get that’. Maybe they experienced personally or know someone that did so they associate with the art,” Patterson said.

“It is a big feature that it may have happened to them, but they may never admit to it and have a quiet chuckle to themselves that, ‘yes, that was me’. And one of his golf buddies may buy it and give it to him because he knows. And they share a laugh because of it.”

And being able to share a laugh in such a tough sport is certainly something all of us golfers can relate to.

“I have found that humor is one of the most challenging of the arts,” the artist stated, “but certainly among the most rewarding.”

The same could be said for the feeling that comes after stroking a solid 5-iron shot in the ocean.

In this article:Artist Gary Patterson