The Thrill-Seeking Actor Hit a Top Speed of 180.361 MPH at the Wheel of a New Continental GT Speed

[dropcap size=small]A[/dropcap]s one of the world’s top actors, Hollywood superstar Idris Elba has the world at his feet. An experienced driver, he does all his own stunts, and is no stranger to a dramatic and high-speed car chase. But what fans may not realize is that Idris has secretly harbored a life-long passion to enter the exciting world of motor sports. The thrill-seeking actor recently hit a top speed of 180.361 mph at the wheel of a new Continental GT Speed on Pendine Sands, Wales. This broke the existing record of 174.8 mph set by Sir Malcolm Campbell nearly 90 years ago in his legendary Napier-Campbell Blue Bird. The UK Timing Association independently verified that the Hollywood star broke the 88-year-old record.

Elba, who famously played Nelson Mandela in the multi-award winning Mandela: Long Walk to Freedom, said: “I’m absolutely elated to have broken the ‘Flying Mile’ at Pendine Sands. It’s an honor to have taken on the challenge, and to successfully follow in the footsteps of the illustrious Sir Malcolm Campbell.”

Despite some challenging tidal conditions on the beach in south Wales, the record was broken in the Crewe-built Continental during filming for the four-part Discovery Channel series, Idris Elba: No Limits, which follows him as he pushes himself to the max to master some of the toughest speed disciplines in the world, before taking to both land and air to participate in these most fiercely fought competitions in sport. The series, which aired on Discovery Channel this summer, captured Idris Elba, as you have never seen him before. Armed with no experience but an abundance of courage, grit, and determination, Idris Elba: No Limits captures every high and low as he takes on the biggest challenges of his life. 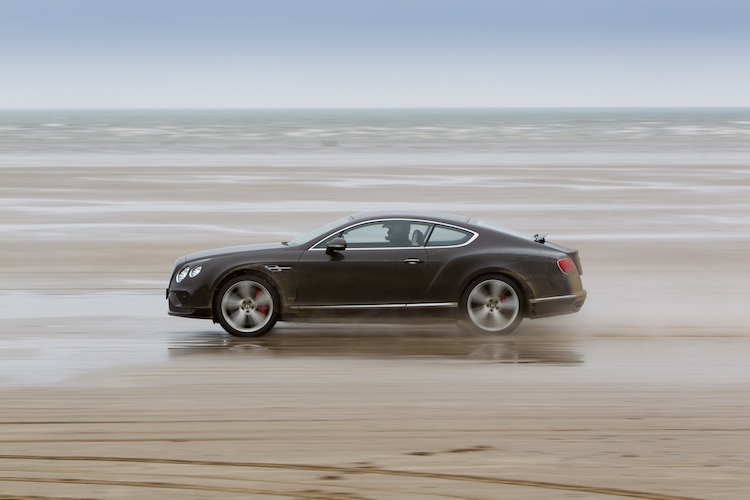 In the Bentley Speed tradition, outstanding performance is matched by an enhanced chassis with up-rated springs, anti-roll bars and bushes, a lowered ride height (by 10mm front and rear) together with re-tuning of the electronically controlled damping and steering systems.