50 Shades of Green in Ireland

Beginners Guide to Getting into Golf on a Budget

The Holiday Gift Guide For That Special Him And Her

Today's Female Golfers Are Demanding More From The Club 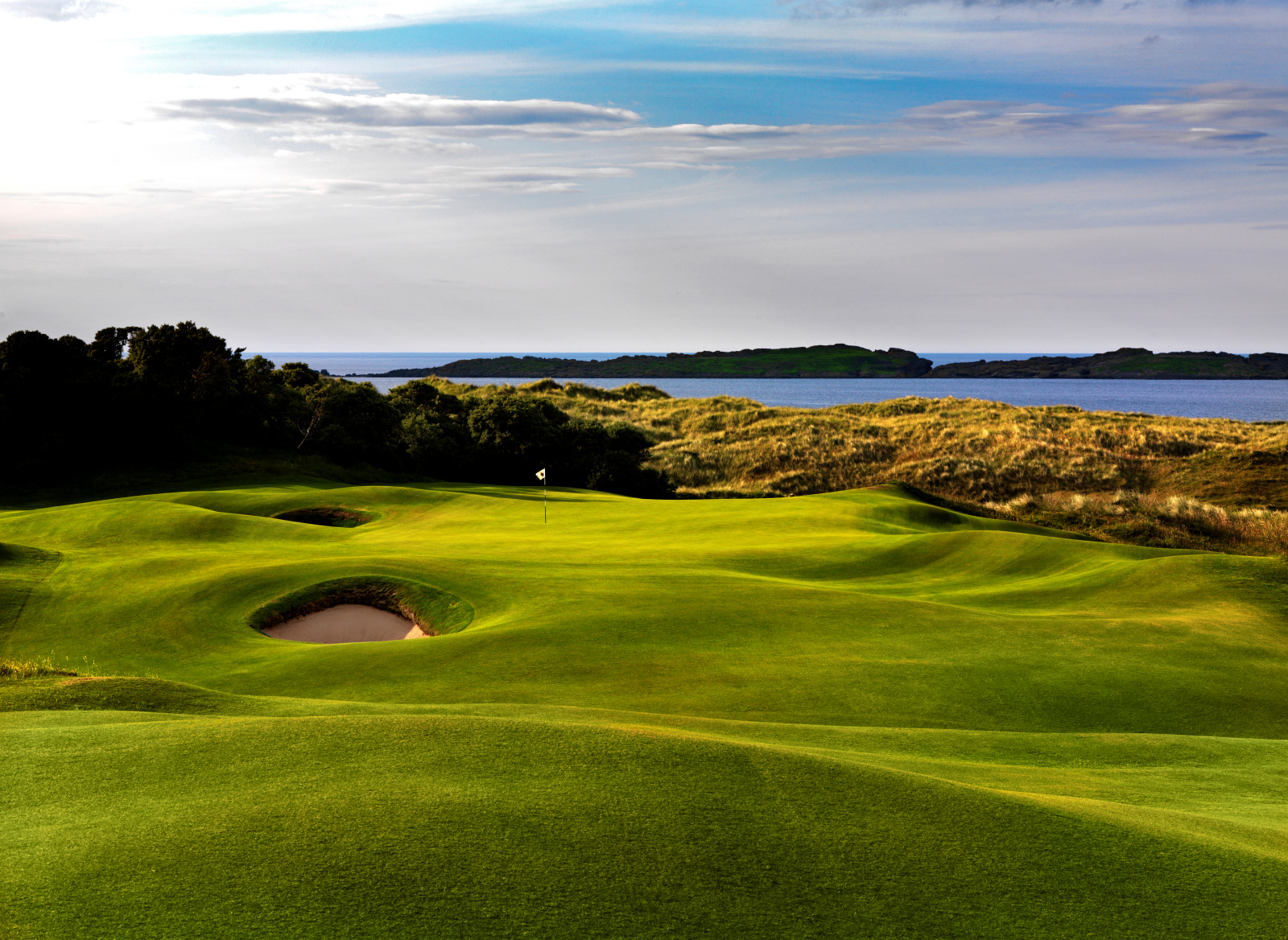 It is hardly a secret that the Emerald Isle is home to many world class golf courses, but with nearly one-third of the entire world’s links courses, Ireland is nirvana for golf as it was meant to be played. How’s that for the luck of the Irish?

The main reason we golf addicts cross the Atlantic is the lure of the links, but for pampered North American swingers, the first encounter with a true links course may come as a bit of a shock. No wall-to-wall fairways, yardage markers or cart girls. “Buggies,” as carts are called in Ireland are few and far between; links courses were meant to be walked, either shouldering your bag or pushing a “trolley.” Better still, hire a caddie, not just for judicious advice on the quirky bounces, but also for local color. Expect to lose plenty of Titleists in the rough and taste the salt in the invigorating air. Links courses were created in the main by Mother Nature, carved through dunes linking land and sea. This is golf as it was meant to be played.

Concentrate on your drives, not your motoring

On my first trip to Ireland, I tossed my clubs into the “boot” of the rental car, opened the left front door and realized the steering wheel was on the right. Jet lag may have had something to do with it. But driving on the “wrong” side of the road can be stressful. On our last trip, our group put the driving and planning into the capable hands of Carr Golf. Joe Carr, the company’s late founder, was one of Ireland’s greatest golf heroes with over 40 championships including three British Amateur titles. Today, Joe’s son, Marty, operates the business, named winner of Golf Digest’s Editors’ Choice Award as 2016’s “Best Tour Operator.”

With our input, Carr booked our tee times, caddies, hotels and sightseeing ventures. When we finished our rounds we piled into our comfortable coach while our driver, Senan, expertly handled the roads.

Our foursome, having played in Ireland on other occasions, decided to hit a combination of top ranked links courses and some lesser-known gems.

Nothing cures jetlag like a round of golf in a stiff wind. That’s just what we encountered at Portmarnock’s Old Course, 15 minutes from Dublin Airport. Pot bunkers abound and the rough is long and fierce.

Portmarnock proved to be a worthy warm-up to Royal County Down, ranked number one on Golf Digest’s 2016/17 “World’s 100 Greatest Golf Courses.”

“It’s one of those rare courses where you could feel a perfect handshake between the hand that created the land and the hand that shaped it into a golf course,” wrote Tom Coyne, author of A Course Called Ireland. Narrow ribbons of fairways wind their way through daunting sand dunes surrounded by beautiful, yet penal gorse and shaggy bunkers.

I knew my caddie Brender and I would get along when he suggested I play the “jubilee tees” on several of the fairways requiring long carries over expanses of gorse. “Where are they?” I asked. “Wherever we want them to be,” he replied with a wink. Royal County Down is tough for the pros; for a high handicapper, such as myself, it’s downright humbling.

For many, hole number nine is golf ecstasy requiring you to launch your ball over a high hill covered in gorse down to the fairway 80 yards below. Royal County Down can be exhilarating or excruciating, but you’ll never forget it.

What an Irishman calls a “bit of a breeze and a mist,” I would call a gale-force wind and torrential downpour. The morning we arrived at Royal Portrush on Northern Ireland’s Causeway Coast I wondered if we should start building an ark.

“Should we wait until it clears a bit,” I suggested to the starter. “It’s looking pretty good now,” he responded as my umbrella blew inside out. OK, we decided, we’ll play this gem designed by Harry Colt come hell or high water.

When my Titleist blew off the tee and Rory, my shivering caddie remarked, “I’m glad it’s you playing in this wind and not me,” I knew we were in for a battle.

Portrush has made renovations on its championship Dunluce links courses in preparation for hosting the 2019 Open. The notorious Calamity Corner (now the 16th instead of the 14th) requires a precise drive over an enormous chasm on the right. Purgatory follows. Aim your blind drive for a striped pole and pray.

Minutes west of Portrush, the Strand Course at Portstewart Golf Club, founded 1894, is a sight for sore eyes. From the elevated first tee you have splendid views of the jagged Antrim coast, and if the sun shines, as it did for us, you will be blessed. Game of Thrones was filmed on the beach below. Rory McElroy has commented that you won’t find a tougher front nine anywhere.

There are plenty more great links courses on the Causeway Coast but our group had decided to spend a few hours driving to a couple of lesser known masterpieces in northwest Ireland. Rosapenna overlooking Sheephaven Bay has been challenging golfers since 1893 when Old Tom Morris created nine holes among the dunes. About a century later a newer Strand nine replaced the old front nine resulting in a wonderfully schizophrenic blend of ancient and modern links. Just beyond the 18th green stands a life-size statue of Old Tom himself. Bring your camera.

For our grand finale we tackled The Dunes at Enniscrone, established in 1918. At 7,033 yards it’s a rollicking romp over towering dunes and serene valleys with grand views of Killala Bay. Scoring well here requires precise aim on the tumultuous fairways. The yardage book describes the 17th as “just like the 17th at Sawgrass except more natural—150 yards of terror, especially when the wind blows! So take good aim, take good care and good luck. If it all fails, enjoy the view!”

There’s an unspoiled magic in Ireland where the mischievous locals offer rewards to every leprechaun caught and a sign on a pub door promises “free beer tomorrow.” Allow plenty of time for sightseeing, pub crawling and mingling.

It’s fitting that the world’s top ranked Royal County Down sits beside the landmark Slieve Donard Resort and Spa. The sprawling Victorian edifice offers grand views of the Irish Sea, especially from the bubbling vitality pool in the spa. Breakfast in the Oak Restaurant is a sumptuous buffet. It was here that I discovered porridge is better when you add fresh cream and a wee dram of Irish whisky.

After rounds at Royal Portrush and Portstewart, the inviting smoky smell of a peat fire lures visitors into the snug Bushmills Inn. Fortify yourself with an Ulster fry breakfast, then head to The Giant’s Causeway, a World Heritage Site and geological marvel. You can hike among the 40,000 six-sided basalt columns formed by cooling lava about 60 million years ago. Nearby, I recommend the tour with samples at Old Bushmills, the world’s oldest licensed distillery, where they’ve been producing the “water of life” since 1608.

We broke up the drive from the Causeway Coast to Rosapenna in County Donegal with a stop in Londonderry where our driver, Senan, conducted a walking tour of the town’s historic walls.

After our round at Enniscrone, we visited Kilcullen’s Bath House, circa 1912. Visitors steep in deep Victorian tubs filled with hot sea water doused with fresh seaweed, known for its natural curative powers to reduce stiffness and make the skin silky soft.

Mount Falcon Estate is within an hour’s drive of 12 golf courses, including Enniscrone, Even if you’re not a golfer it should go on your bucket list.  Golf pro, Mark O’Meara, likes to fish for wild salmon on the banks of the River Moy where Mount Falcon has exclusive angling rights.

Originally a baronial lodge the 19th century estate was renovated and reopened in 2006. Guests can stay in the manor house or in fully equipped rental lodges, ideal for golf groups.

Chef Willimont of the Kitchen Restaurant serves innovative dishes using produce from the Estate’s own gardens. You might feast on turnip and horseradish soup, salmon with a gin and beet purée and cassis, elderflower and apple cobbler. Sip your nightcap in the lively Boathole Bar.

I recommend taking a “hawk walk” with Jason Deasy, the resident master falconer. We ventured into the woods with Deasy, his dog Chili and Arizona, a Harris hawk initially tethered to our guide’s glove. Deasy demonstrated how to call and release Arizona. Each time he performed his takeoff and landing ritual, Arizona received a reward of a raw chicken leg tucked into the palm of our sturdy leather gauntlets so he was a bit lazy about hunting for critters, which was fine with me. With wingspans of up to six feet, razor-sharp beaks and powerful talons, it’s thrilling enough to have such a powerful “terminator” at the end of your arm. Sure and begorrah, it makes golf seem rather tame.

Royal Portrush Golf Club will host The 148th Open from July 18-21 for the first time since 1951. The return marks only the second time in the tournament’s 150 year history that the event will be hosted outside of Scotland and England. For more information on links golf in Ireland visit Carr Golf.